The Young and the Restless Spoilers: Victor Returns For Major Action – Rescues Coverup Crew and Teaches Nick a Lesson 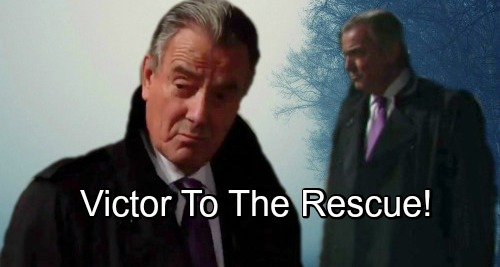 The Young and the Restless spoilers tease that Victor’s (Eric Braeden) absence from Genoa City will soon be answered. What impact the Moustache has on Genoa City upon his return will surely prove intriguing, as always.

Braeden’s recent time off from this iconic soap opera occurred in late summer and early fall. The longtime daytime actor recently advised per a social media account that Victor’s coming storyline will be dramatic.

It would be easy to put the Black Knight in a line of suspects as the potential person who is antagonizing the coverup crew. However, upon reflection, why would the man who hated J.T. Hellstrom (Thad Luckinbill) be opposed to what Nikki (Melody Thomas Scott) accidentally did?

Victor didn’t appear to know that his wife, Vickie (Amelia Heinle), Phyllis (Gina Tognoni), and Sharon (Sharon Case) were involved in J.T.’s demise and burial at Chancellor Park. It’s possible that he’s learned this information during his extended business trip. But if that is true, then he’ll surely do all he can to help fight the coverup crew’s anticipated prosecution.

In any regard, the clue Rey (Jordi Vilasuso) discovered is building toward a full reveal of what took place last fall in Vickie’s bedroom. Victor is the one force of nature that Nikki, in particular, will need to help defend her honor so she doesn’t spend the rest of her life behind bars.

As viewers recall, J.T. targeted Victor. The intent, as initially led by Paul (Doug Davidson) and Christine (Lauralee Bell), was to gather evidence against a man who was seen as corrupt. A purported price-fixing scheme was to be unveiled, but J.T. was unable to find evidence in that regard.

That outcome eventually led Luckinbill’s character to leave Victor for dead at the Newman Ranch and then to try and kill him in the hospital. Both attempts failed.

While the above develops, Dark Horse rides on. As a result, Newman Enterprises continues to take numerous business hits.

Victor has surely been working his worldwide contacts to counter Nick’s (Joshua Morrow) goal of driving his father’s company into the ground. Never one to be counted out, Victor has certainly been repairing relationships and formulating lines of attack that can be waged against his son’s rival enterprise.

Victoria was previously told by her dad that he intends to allow Nick to pursue his passion for awhile. Then, over time, Dark Horse will either fall of its own weight, or be taken down, after which it could be acquired by their family company.

The Moustache’s above-projection will certainly play at least well into next year. So any skirmishes that are seen at the tail end of 2018 should merely serve as precursor’s to the overall father-son struggle. CDL is a leading source for everything linked to The Young and the Restless. Check back regularly for Y&R spoilers and news!