The Young and the Restless Spoilers: Victoria Relaxes Her Defenses – Spills The J.T. Beans To Nate

BY hellodrdavis on September 11, 2018 | Comments: 2 comments
Related : Soap Opera, Spoiler, Television, The Young and the Restless 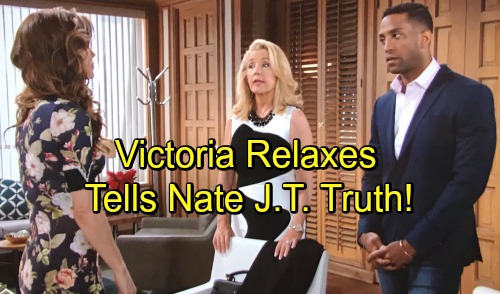 The Young and the Restless spoilers tease that Victoria (Amelia Heinle) will be in dire straits in the coming weeks. Of all of the coverup crew ladies, Victoria is coping the worst. She can’t sleep, she’s running herself ragged with the kids, and now she’s had a panic attack. The truth about what happened to J.T. (Thad Luckinbill) is weighing on her particularly hard.

Victoria tends to worry more than her partners in crime. Sharon (Sharon Case) panics easily, but is quickly talked down and distracted. Phyllis (Gina Tognoni) is too busy planning her next move to be too worried about the coverup. And Nikki (Melody Thomas Scott) is used to compartmentalizing and keeping things from people.

But Victoria carries the weight of J.T.’s death and burial with her at every moment. It’s never far from her mind, and she can simply get no reprieve from the guilt and fear that they’ll all be caught. She copes by trying to stuff her feelings, which just makes her feel angry and shut off from the world.

And now that Nick (Joshua Morrow) has been arrested and is under suspicion for J.T.’s disappearance, Victoria’s going to be even more worried. She’ll feel horrible that her brother may be implicated in something the coverup crew did, and she’ll be terrified that Rey (Jordi Vilasuso) will keep digging until he discovers the truth.

At some point, Victoria is going to have to turn somewhere for relief. She’ll just have to get the truth off her chest. Y&R spoilers say that Victoria will soon relax her defenses. But how? Will she turn to drinking for relief? She certainly wouldn’t be the first person to try to cope in that fashion.

She’s told Nate (Brooks Darnell) just a smidge about her history with J.T., but might she be tempted to tell him the full truth? Nate’s had a close eye on Victoria for some time now, and he kindly helped her during her panic attack. He’d probably be the most likely person she’d turn to.

Perhaps Victoria will have a few drinks too many and she’ll spill the beans to Nate about what happened with J.T. Or maybe Nate will become her personal physician and prescribe some sedatives that will relax Victoria to the point at which she’s comfortable confiding in him.

How do you think Victoria’s defenses will be “relaxed?” And do you think she’ll spill the beans to Nate? Stay tuned to the CBS soap and don’t forget to check CDL often for the latest Young and the Restless spoilers, updates, and news.