The Young and the Restless Spoilers: Victoria’s Pressure Mounts – Rey Senses Weakness, Pushes Her Over The Edge 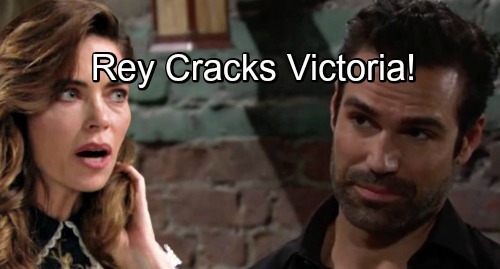 The Young and the Restless spoilers tease that Vickie (Amelia Heinle) won’t be able to hold on much longer. Rey’s (Jordi Vilasuso) arrival in Genoa City is proving to push J.T.’s (Thad Luckinbill) target toward a breakdown.

An increasing number of Genoa City residents have taken noticing to Vickie’s frazzled state. Her general demeanour and look sport erratic, at best. That’s understandable considering the pressure she’s under, which includes that responsibility she sought.

Raising two young children, who are rarely shown on Y&R, is Vickie’s alleged first priority. Handling that task without their father being present is a task modern minds believe can be handled solo. Rational thought obviously affirms that a mom and dad are better than either alone, which explains Vickie’s recent swipe at Billy (Jason Thompson).

Villy is a story all its own. Suffice it to say that Billy does what he can, while not living full time with his own biological children. As hardcore viewers recall, Katie (Sienna Mercuri) is Villy’s child. But Johnny (Holden and Ryan Hare) is Chilly’s child who Vickie generously adopted and is raising while Chelsea (Melissa Claire Egan) is God knows where with Connor (Gunner and Ryder Gadbois).

The pressure of working for the Moustache would be enough all on its own. But being forced to carry the weight left behind by the departed ladies isn’t anything anyone could likely handle. Nick (Joshua Morrow) surely couldn’t, as he rejected his dad’s job offer within days of accepting it and then morphed into an alternate character.

Then there is the dead man, J.T. Hellstrom. His disappearance has spurred the arrival of Y&R’s newest character, Rey, who is also Arturo’s (Jason Canela) brother.

Whether Rey is actually only a debt collector, who is following J.T.’s credit line in an attempt to locate him, is an open question but Y&R buzz says no, he’s not. The effect of Rey’s increasing interaction with the coverup crew is pushing Vickie over a mental edge. Her fall could reveal all, which could then send at least Nikki (Melody Thomas Scott) to prison.

Sooner than later, which implies a fall reveal, Vickie will either make an unforced error, or simple break. How that climax will impact her family, business reputation, or J.T.’s resting place remain to be seen. CDL is a leading source for everything linked to The Young and the Restless. Check back regularly for Y&R spoilers and news!