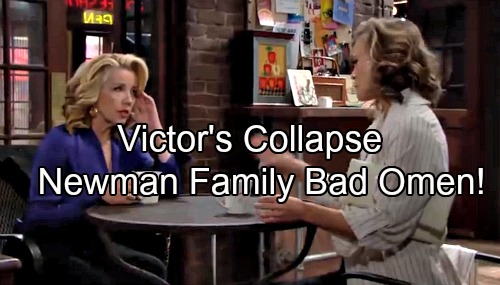 The Young and the Restless spoilers tease that Victor’s (Eric Braeden) collapse in the stables underscores the overall state of the Newman family. A separate, criminal quartet, which includes two members of Victor’s clan, is also reeling and doesn’t appear likely to escape trouble soon.

Nikki (Melody Thomas Scott) is hoping J.T. (Thad Luckinbill) remains buried. Vickie (Amelia Heinle) is dealing with aftermath of her departed love’s actions and is worried that her mother’s act of self-defense will be exposed. Meanwhile, Nick (Joshua Morrow) remains in the dark about what transpired and believes he’s searching for his almost second-time brother-in-law.

Victor’s recovery from the fight with J.T. has been challenging. The Black Knight initially fell into a coma. Then, when his assailant was frightened by Victor’s awakening, he turned off the ventilator which caused the Moustache to have a mini-stroke. Not surprisingly, this show’s lead male character survived both attempts on his life.

Being released to the Ranch has aided Victor’s psyche. However, he presses too hard during physical therapy and collapses in the stables on Monday’s new Y&R episode, April 30. That’s likely a minor setback, as this particular (New)man is as tough as ever.

Nikki’s growing concerns are valid, as Sharon (Sharon Case) has become increasingly guilt-ridden. Reed’s (Tristan Lake Leabu) angst pushed Sharon’s feelings, which have been fleeting. She wants to tell Paul (Doug Davidson) what happened, but knows that doing so could, or will, send her other collaborators to jail.

Vickie’s mind is spinning. She went all-in to a revived relationship with her former husband. But JTV Part II proved to be more than a disaster, as J.T.’s death created consequences that will negatively affect Vickie and Reed’s life in ways that can’t be projected.

Nick’s pursuit of justice is understandable. He naturally began pursuing J.T. as soon as he learned Mr. Hellstrom was his father’s assaulter. The quartet of ladies who served as J.T.’s unexpected pall bearers know that Nick’s persistence could lead to jail cells.

Yes, trying to keep this particular problem within Chancellor Park appears possible. But considering the soapy world that is Genoa City, Y&R fans must believe that the cadaver in question will somehow be found. From that point CSI work could link Nikki, Vickie, Sharon, and Phyllis (Gina Tognoni) to the crime of this century in Wisconsin.

However, it must be noted that all dramatic proceedings are actually bringing the Newman family closer together. While this powerful contingent will likely always experience differences, times of crisis, such as this one, serve to remind them that their blood-ties matter.