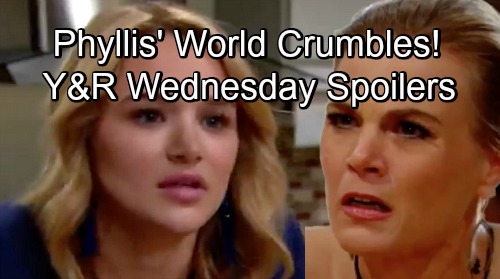 The Young and the Restless (Y&R) spoilers for Wednesday, August 15, tease that Phyllis (Gina Tognoni) is in for a big surprise. She tried to put her hookup with Nick (Joshua Morrow) behind her, but her sneaky daughter’s about to make a few waves. Summer (Hunter King) finds out the secret in Tuesday’s episode, so she’ll be ready to make her newfound knowledge known soon enough.

On Wednesday, Summer will deliver the shocker and enjoy making her mom squirm. She’ll taunt Phyllis for stringing Billy (Jason Thompson) along while keeping Jack (Peter Bergman) and Nick as backups. Of course, Phyllis will insist that it’s not like that. She shut down Jack’s attempt to reconnect and her intimate session with Nick was a one-time mistake.

Phyllis will assure Summer that she has something real with Billy and doesn’t want to screw it up. However, Summer may argue that Phyllis should’ve thought about that before she slept with her ex.

The Young and the Restless spoilers say they’ll have an explosive argument, which may not work to Phyllis’ advantage. The angrier Summer gets, the more likely she is to expose he secret to Billy.

That’s why Phyllis will call for reinforcements later this week. She’ll hope Nick can get a grip on their wild child! In the meantime, Lily (Christel Khalil) will expect a terrible outcome.

She’ll pretty much give up on any chance of keeping her freedom. Y&R spoilers say Lily will just want to accept her fate and get this over with. She’ll be prepared to face a difficult punishment and be separated from her family.

Nevertheless, Lily’s loved ones won’t be ready to throw in the towel. Cane (Daniel Goddard), Charlie (Noah Alexander Gerry) and Mattie (Lexie Stevenson) will band together to keep Lily out of trouble.

Will they succeed or fail? The Young and the Restless fans will have to wait and see, but some nail-biting moments are coming up before Lily’s sentencing.

Finally, Michael (Christian LeBlanc) will find himself feeling protective. When Lauren (Tracey E. Bregman) deals with some backlash, Michael will rush to her defense.

This will probably be over Lauren’s desire to cut ties with Jabot. She’d rather take Fenmore’s somewhere that has a less risky CEO, but breaking up this partnership would bring more drama.

Billy’s definitely been making some ill-advised decisions lately, but Ashley (Eileen Davidson) and Kyle (Michael Mealor) will work hard to turn things around. We’ll give you updates as other Y&R news emerges. Stay tuned to the CBS soap and don’t forget to check CDL often for the latest Young and the Restless spoilers, updates, and news.