BY Heather Hughes on August 14, 2018 | Comments: one comment
Related : Soap Opera, Spoiler, Television, The Young and the Restless 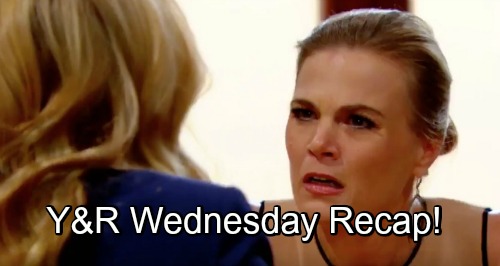 The Young and the Restless (Y&R) spoilers for Wednesday, August 15, tease that Michael (Christian LeBlanc) will blast Phyllis (Gina Tognoni) over the mess at Jabot. He’ll be upset that she’s taking Billy’s (Jason Thompson) side instead of Lauren’s (Tracey E. Bregman). Phyllis will defend her choice and promise to smooth things over with Lauren later.

Talk will turn to Lily’s (Christel Khalil) legal nightmare. Phyllis will get why Devon’s (Bryton James) pushing for justice, but Michael won’t think Lily deserves jail time. He’ll point out that Hilary (Mishael Morgan) wouldn’t like the drama she left behind.

At The Dive Bar, Summer (Hunter King) will discuss her latest discovery with Kyle (Michael Mealor). She’ll insist that Phyllis and Nick’s (Joshua Morrow) hookup will end “Philly” for good. Afterward, Sharon (Sharon Case) and Nick will mosey over. Summer will urge them to spill their secret for a happy relationship, so she’ll obviously be enjoying her newfound knowledge.

Once they’re alone, Kyle will push Summer to disclose her plans. He’ll imply that if she’s going to destroy Phyllis and Billy’s romance, she’d better be sure about it. However, Kyle will admit this might work to his advantage. If Billy sleeps with Summer over this and that scandal erupts, it could help Kyle get ahead at Jabot.

Back with Nick, he’ll spar with Victor (Eric Braeden) before a cake-tasting session with Sharon. Once Nick takes off to deal with work stuff, Victor will start needling Sharon. She’ll try to shut him down, but Victor will maintain that his son is like him in a lot of ways. It seems he’ll want to spook Sharon a bit.

Other Young and the Restless spoilers say Phyllis will find Lily at Hamilton-Winters. Lily will admit that Neil (Kristoff St. John) stood up for her, so she was able to keep her position. Unfortunately, Devon’s (Bryton James) too furious to work near Lily. He’s conducting business from home at the moment.

Phyllis will admit that she wanted Lily to pay at first, but she’ll add that she’s had a change of heart. Lily’s punishing herself enough as it is. Phyllis won’t think hatred and revenge will accomplish anything. She’ll embrace Lily to show her support and head for the exit.

Later, Michael will arrive and fill Lily in on what to expect. He’ll promise to ask for leniency and highlight Lily’s clean record. Lily will confess that Cane (Daniel Goddard) had a getaway plan, so Michael will be pleased that didn’t pan out. Any chance of reducing Lily’s sentence would’ve gone up in smoke.

At the apartment, Phyllis will tell Summer about Lauren possibly ditching her partnership with Jabot. She’ll believe they should try to make Billy rein in his plans. Summer will suggest that Phyllis is betraying Billy, but her mom won’t see it that way. They’ll have a fierce confrontation that ends with a Y&R shocker.

Summer will eventually ask why Phyllis cheated. When Phyllis denies it, Summer will snarl that she knows what her mother did and who she did it with. The Young and the Restless spoilers say this bomb will bring even more conflict on future Y&R episodes, so don’t miss the chaos ahead.

Are you ready to see Phyllis scramble? We’ll give you updates as other Y&R news comes in. Stay tuned to the CBS soap and don’t forget to check CDL often for the latest Young and the Restless spoilers, updates, and news.