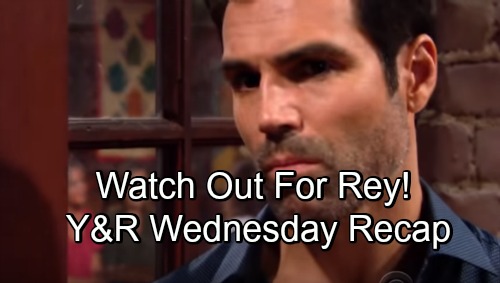 The Young and the Restless (Y&R) spoilers for Wednesday, August 29, 2018 begin with Phyllis (Gina Tognoni) arriving at Crimson. Sharon (Sharon Case) has been trying to find Summer (Hunter King) so Phyllis first informs her that Summer is on holidays and advises her to leave a message at the apartment, then tells her Billy (Jason Thompson) and her have moved into the Abbott mansion; Phyllis finds it hard living in the house she once shared with Jack (Peter Bergman).

Phyllis mistakenly reveals that she knew about Nick (Joshua Morrow) impersonating JT (Thad Luckinbill), which peaks Sharon’s curiosity. Phyllis acts like the only reason Nick told her is because they are Summer’s parents and she was at Victoria’s (Amelia Heinle) home the night JT disappeared. Sharon admits she is probably overreacting; but Phyllis warns her that they need to pay attention to Victoria, who is falling apart.

Y&R sources show Victoria literally runs into Rey (Jordi Vilasuso) as she is trying to leave the Dive Bar. He reveals that he knows who she is, and met her lovely parents. Once she leaves the rooftop, Rey looks through the photos he took of her on his phone.

Victor (Eric Braeden) and Nikki (Melody Thomas Scott) are talking, when a rushed Victoria apologizes for being late. Victor begins to chastise her but she quickly informs him she has been busy putting out fires that Nick and his new company, Dark Horse have caused for Newman Enterprises. She leaves the table to take another business call and Victor wants Nikki to tell him what is wrong with Victoria.

Victor feels partially responsible for Victoria’s mood and they both apologize for their attitudes. He suggests they have dinner and invite Abby (Melissa Ordway) to come too. Victoria returns to the table, knowing Nikki tried to cover for her. She tells Nikki that if she really wants to help, she needs to back off!

Nate (Brooks Donnell) attempts to talk to Devon (Bryton James) about doing the right thing when it comes to Lily (Christel Khalil) and her sentencing, but he doesn’t want to hear it anymore. Abby arrives, revealing she has seen Lily and she isn’t in good shape.

Devon doesn’t feel sorry for Lily and shows Abby the statement he has written for the judge. Abby wants to know whether he wants his sister to be treated fairly or get the maximum sentence.

Devon feels his statement won’t be enough to give Lily the maximum sentence. Abby feels Devon is not this person, but he says circumstances have changed him and even all the love in the world won’t being back his wife, Hilary (Mishael Morgan) or his baby and apparently he is the only person who is thinking of the two of them.

Abby warns him if he goes through with this, he will push his entire family away. Devon angrily tells her that he wishes people would stop telling him what to do. Their conversation is interrupted when Victor calls, inviting Abby for dinner. Abby uses it as an example of how their family always makes an effort. Devon insists he isn’t doing this to hurt Lily, but this is what Hilary and the baby deserve.

AT GCAC, Victor suggests that Victoria and Abby act more like sisters again; Victoria apologizes for her mood and Abby accepts. Victor tells Abby she is always welcome back at NE, but she finds he is laying the praise on a little too thick with Victoria.

Victor wants to celebrate, but before they can Rey stops by their table, shocking everyone by revealing he is Arturo’s (Jason Canela) brother. Victoria says she is going to work, but Nikki follows her, saying she wants to be there for her. Victoria bites back that she doesn’t want, nor need her help.

Nikki reminds her that she used to use the exact same words every time she was drowning! Abby wants to know what is going on between mother and daughter.

Victor tells Abby that he has accepted her working with her brother, but doesn’t want his troublesome relationship with Nick to interfere with theirs. She promises to not let him, nor the Newman name down.

Nate finds Devon returning from a run, learning he heard what Abby had to say but feels she is only interested in one side. Nate tells Devon that Abby is stuck in an impossible situation as both him and Lily are her friends. He doesn’t think Devon will find justice putting Lily in prison for two decades.

Devon agrees but feels if no one is held accountable for Hilary and the baby’s death, then he failed them! Nate tries to explain what this will do to his remaining family if he goes through with the statement and that time doesn’t make things easier, especially when you’re alone!

Sharon is in the middle of apologizing to Phyllis for implying Summer has “Spoiled Brat Syndrome”, remembering Cassie’s (Camryn Grimes) own rebellious phase and how that tragically ended.

Rey finds the two women together and even though they both offer to help him find more work; he tells them he simply appreciates their friendship and is just a guy trying to take care of his new friends; although it seems the two of them are more than capable of that on their own. Nikki and Victoria walk into the coffeehouse and are immediately suspicious of Rey.

Victor finds Devon sitting up on the rooftop, admitting how much Hilary loved it there. He tells Victor he thought it would comfort him to be there but all he sees are people moving on with their lives and he doesn’t know how to act. Victor knows about the hearing tomorrow and although he feels Hilary gave as good as she got.

Devon reminds Victor that Lily grew up privileged while Hilary had to fight for everything she wanted and in the end it was Lily’s pettiness that killed Hilary.

Victor admits he also knows Devon has a difficult decision to make, even though its a tragic accident. So when Devon asks for advice, Victor tells him about his own family issues with Nick and how he overstepped this time and Victor doesn’t believe they could ever recuperate from it; if Devon feels like he cannot forgive Lily than no one has the right to tell him otherwise, as this is entirely his choice!

As Phyllis, Sharon, Nikki and Victoria are talking about Rey, Abby arrives to grab a couple drinks. Victoria demands answers and Abby admits that Rey said he was worried about Abby after everything with JT. When Abby leaves, all four women are concerned about Rey’s curiosity regarding JT.

Abby brings Nate a drink and they talk about Devon. They both think Devon truly believes he is doing this for Hilary and wish there was someone they knew who could get through to him before its too late.

Victoria tells the women that she doesn’t like that Rey has been asking so many questions. Nikki feels she is being paranoid, insisting they all relax but then Victoria makes a valid point.

Why have none of them even found it weird that a new person would come to Genoa City, asking questions about her ex, JT, and purposely going out of his way to get to know all of them? Rey is standing at the door, watching the four paranoid women!