BY Marcy Cohen on January 22, 2018 | Comments: one comment
Related : Soap Opera, Spoiler, Television, The Young and the Restless 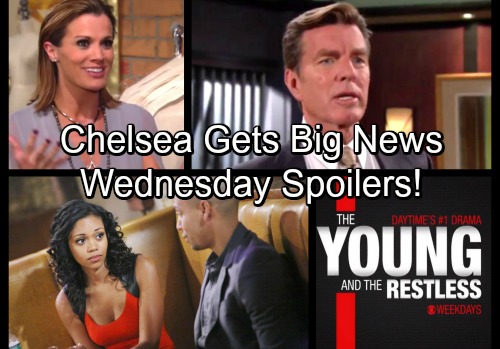 The Young and the Restless (Y&R) spoilers for Wednesday, January 24, tease that Jack (Peter Bergman) and Ashley’s (Eileen Davidson) corporate drama will rev up. Now that Dina’s (Marla Adams) in Paris, they can focus on the future of Jabot. Ashley and Jack will meet with the arbitrator to deliver their statements. It won’t take long for this meeting to take a vicious turn.

Ashley will argue that Jack’s made plenty of terrible decisions in the past. She’ll think Jack has consistently let personal vendettas get in the way of good business. Ashley will insist that the blood-relative bylaw should be ignored. She’ll maintain that she’s the leader the company needs right now.

Jack will take a ruthless approach to eliminating this threat. He’ll contend that Ashley feels like she’s on the outside of the Abbott family. Jack will note that Ashley doesn’t have a relationship with her mom, but that isn’t true anymore. Once Dina returned to town, Ashley actually managed to reconnect with her.

Nevertheless, Jack will spew lies and suggest that Ashley’s targeting him now. He’ll state that she needs to be kept off the Jabot throne. The Young and the Restless spoilers say Ash will make a stunning move later this week of January 22, so it sounds like the arbitrator may side with Jack. This decision may force Ashley to deliver some unexpected blows.

Elsewhere, Nick (Joshua Morrow) will catch Chelsea (Melissa Claire Egan) off guard. He’ll shock her with some big news, so Chelsea will have a lot on her mind. Will this be a pleasant surprise or another obstacle to tackle? Stick with Y&R to see what’s next for Chelsea and Nick.

In the meantime, Devon (Bryton James) will have an offer for Hilary (Mishael Morgan) to mull over. He may spot her doing research on her baby goals. Hilary is looking for any path to motherhood she can find. She just wants to be a mom as soon as possible.

Perhaps Devon has some connections that could help Hilary achieve her dream. There’s a good chance Hilary and Devon will make this baby the old-fashioned way eventually. Y&R just has to let the rest of the story play out first. This popular pairing should reunite and make it happen down the road.