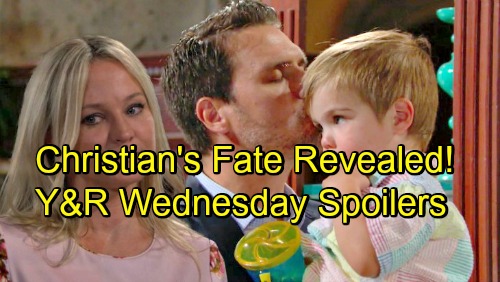 The Young and the Restless (Y&R) spoilers for Wednesday, July 11, tease that Nick (Joshua Morrow) and Sharon (Sharon Case) will mull over their future. They’re planning on tying the knot this fall, so that’s certainly something to look forward to. However, the custody situation still hasn’t been settled. It’d break their hearts to think of building a life together without Christian (Jude and Ozzy McGuigen).

In Tuesday’s new Y&R episode, July 10, Brittany (Lauren Woodland) calls Nick and lets him know a final ruling is on the way. The Young and the Restless already got plenty of drama out of this custody battle. Perhaps it’s time to put it to rest and focus on other storylines. That could mean Sharon and Nick will get good news on Wednesday, but they’ll remain on edge until they know for sure.

Elsewhere, Nate (Brooks Darnell) will settle in and adjust to life in Genoa City. He’ll make himself at home as he tries to head down a new path. Nate’s still coping with plenty of pain thanks to his devastating history, but he has to press on. He’ll keep putting one foot in front of the other and hope he can find some happiness again.

Meanwhile, Phyllis (Gina Tognoni) will give Hilary (Mishael Morgan) a tip. There’s no word yet on what this tip’s about, but there are some good options to consider. It’s possible Hilary will be on the hunt for Nate. She can’t seem to steer clear of him, no matter how many times they bicker. If Phyllis knows where he is and what he’s up to, she might be able to point Hilary in his direction.

Then again, Phyllis could inadvertently let something slip. She might make a comment that ultimately tips Hilary off to Billy’s (Jason Thompson) drama. Phyllis doesn’t know what’s up yet, but she could still put Hilary hot on the trail.

Y&R fans know Billy gambled the yacht away, so he’ll work to get it back with Summer’s (Hunter King) help. Hilary could easily catch them together and realize something’s going on. Of course, there’s plenty more trouble for Hilary to fall into. The Young and the Restless spoilers say she’ll get caught in the middle of some tricky situation, so stay tuned.

It sounds like some exciting scenes are coming up. We’ll give you updates as other Y&R details emerge. Stick with the CBS soap and don’t forget to check CDL often for the latest Young and the Restless spoilers, updates, and news.