The Young and the Restless Spoilers: Wednesday, May 2 – Paul Suspicious as Victoria Lies – Nick Struggles to Resist Sharon

BY Heather Hughes on April 30, 2018 | Comments: one comment
Related : Soap Opera, Spoiler, Television, The Young and the Restless 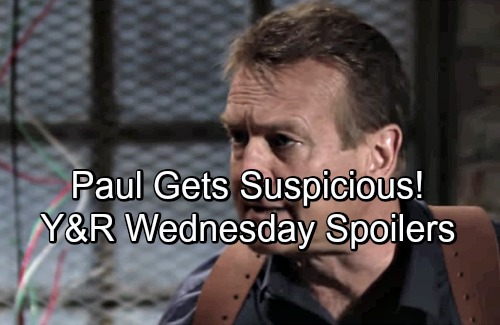 The Young and the Restless (Y&R) spoilers for Wednesday, May 2, tease that Victoria (Amelia Heinle) will face another grilling session. As Paul (Doug Davidson) digs deeper in this investigation, he’ll have a few more questions. Paul will hope that Victoria can help him get to the bottom of this mystery, but big secrets will undoubtedly get in the way.

Victoria, Nikki (Melody Thomas Scott), Sharon (Sharon Case) and Phyllis (Gina Tognoni) all made a risky pact. They covered up J.T.’s (Thad Luckinbell) death and they intend to take that news to their graves. However, The Young and the Restless spoilers say Paul will grow suspicious during his next chat with Victoria. She’ll attempt to stay calm and provide Paul with answers, but her lies could trip her up if she’s not careful.

Other Young and the Restless spoilers say Nick (Joshua Morrow) will struggle with his feelings for Sharon (Sharon Case). These two have definitely been growing closer lately. After Sharon divulged Christian’s (Jude and Ozzy McGuigen) paternity shocker, Nick leaned on her for support. They continued to bond once Nick moved in, but they’ve been trying to maintain some boundaries.

Of course, Sharon’s distressed behavior could hinder that plan. The more rattled Sharon gets, the harder Nick will fight to help her. In the midst of all this, Nick will battle his growing love. Y&R fans can expect major temptation in Wednesday’s episode. Nick will do whatever he can to resist it, but it certainly won’t be easy!

Across town, Phyllis (Gina Tognoni) will take a break from the cover-up drama and focus on someone else’s problems. The Young and the Restless spoilers say Hilary (Mishael Morgan) will be under fire, so Phyllis will try to help. She’ll rush to her friend’s defense, but that probably isn’t the best idea. Hilary found out she wasn’t pregnant after all, so she’s got a new baby plan cooking up.

It seems Hilary’s plot will move forward for now. Phyllis can act like Hilary’s an honest and loyal person all she wants, but Y&R viewers know Hil’s a schemer at heart! We’ll give you updates as other details emerge. Stick with the CBS soap and don’t forget to check CDL often for the latest Young and the Restless spoilers, updates, and news.