The Young and the Restless Spoilers: Week of April 9 – J.T. Killed in Final Showdown – Victoria Gets Help Disposing of the Body 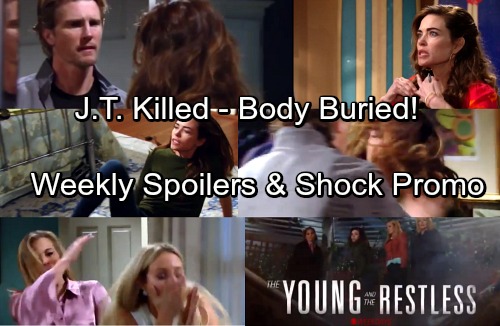 The Young and the Restless (Y&R) spoilers for the week of April 9-13 tease that some shocking episodes are ahead on the CBS soap. When we say shocking, we mean SHOCKING! Y&R fans won’t want to miss a minute of the action as J.T.’s (Thad Luckinbell) horrific arc winds down.

It looks like Victoria (Amelia Heinle) will finally get a clue about some of J.T.’s secrets. For starters, she might discover that he went behind her back and tried to take Victor (Eric Braeden) down at Newman. That would certainly leave her furious since he ripped into her for using him against Ashley (Eileen Davidson).

However, that’s just the tip of the iceberg! There’s much more for Victoria to uncover and the details are sure to leave her stunned. The Young and the Restless spoilers say Victoria will take her wedding ring off and insist that they’re through. She would probably have a stronger reaction if she knew about the attempts on Victor’s (Eric Braeden) life, so that revelation must come later.

Victoria will throw J.T. out of the house, but he’ll return later in hopes of working things out. J.T. will declare that their story can’t end like this, but Victoria won’t listen this time. She’s bought his lies for long enough. The Young and the Restless spoilers say Victoria will once again get rid of him, but he’ll sneak up on her once more. J.T. will look awfully menacing as they prepare for a fierce showdown.

That might be when the whole ugly truth comes out. Victoria will determine that J.T. really is a monster when she learns he tried to kill her father twice. Victor isn’t a great guy, but he didn’t deserve to be thrown down a staircase and deliberately taken off life support. J.T.’s the real villain in this particular storyline!

Victoria will soon be in a fight for her life as J.T. holds the door and attacks. She’ll end up scrambling on the floor, but help is on the way. It appears Phyllis (Gina Tognoni), Sharon (Sharon Case) and Nikki (Melody Thomas Scott) will arrive for a girls’ night, but this evening won’t bring the fun they expected.

Based on Y&R’s weekly promo, it seems J.T. will be killed during this final faceoff. The final shot of the preview video shows the women gathered somewhere in the dark. There’s a good chance they’ll be disposing of the body!