BY Heather Hughes on August 9, 2018 | Comments: one comment
Related : Soap Opera, Spoiler, Television, The Young and the Restless 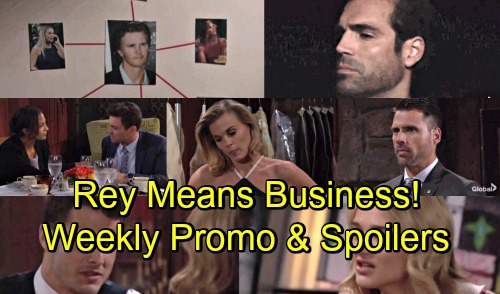 The Young and the Restless (Y&R) spoilers and new promo video for the week of August 13-17 tease some stunning secrets are on the verge of exposure. First, Summer (Hunter King) will get a few more clues about her mother’s mystery man. She’ll be determined to figure out who Phyllis (Gina Tognoni) hooked up with.

During a chat with Kyle (Michael Mealor), Summer will consider the options. Phyllis isn’t interested in Jack (Peter Bergman), so they’ll agree it must be somebody else. After mulling it over, Kyle and Summer will realize Nick’s (Joshua Morrow) the culprit.

Y&R spoilers say Summer will blurt out that her mom hooked up with her dad. She’ll be horrified by this jaw-dropping revelation.

Meanwhile, Victoria (Amelia Heinle) will have a little fun at Phyllis and Sharon’s (Sharon Case) expense. The Young and the Restless spoilers say Nick and Sharon’s wedding plans will be in full swing. It sounds like Victoria will be a bridesmaid, so she’ll meet with Sharon to discuss dresses and fittings.

Nikki (Melody Thomas Scott) and Phyllis will also be on hand, so they may have another cover-up meeting while they’re at it. When Nick appears, it seems he’ll question Phyllis’ involvement. Victoria will pipe up that it makes perfect sense for Phyllis to be a bridesmaid, too. She’ll suggest that Sharon and Phyllis have gotten chummy lately, so why not?

Nick and Phyllis will exchange a nervous glance. The last thing Nick wants is the ex he betrayed Sharon with to be in the wedding party! Nevertheless, Sharon will probably roll with it and urge Phyllis to help her out.

She’ll just try to focus on the positives here. Sharon loves Nick and expects to kick off their new chapter together. She has no idea how much drama’s in store.

Other Young and the Restless spoilers say Jordi Vilasuso will make his first appearance as Rey. He’ll gaze at a picture of J.T. (Thad Luckinbill), which will be surrounded by photos of Victor (Eric Braeden) and the girls’ night gang.

It looks like Rey’s going to be a new detective in town. Based on the steely glint in Rey’s eyes, Nikki and the others have a big problem.

An exciting week’s ahead on the CBS soap. We’ll give you updates as other details emerge. Stay tuned to Y&R and don’t forget to check CDL often for the latest Young and the Restless spoilers, updates and news.