The Young and the Restless Spoilers: Week of August 6 – Sexy Schemes, Prison Time and Vicious Showdowns

BY Marcy Cohen on August 3, 2018 | Comments: one comment
Related : Soap Opera, Spoiler, Television, The Young and the Restless 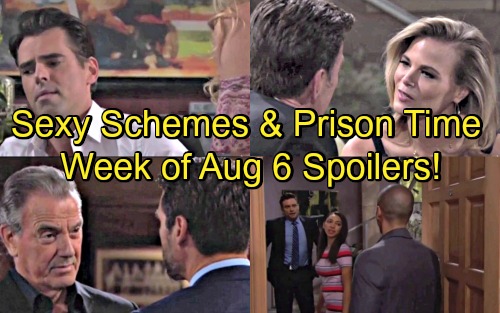 The Young and the Restless (Y&R) spoilers for the week of August 6-10 tease that more drama’s ahead in Genoa City. First, Summer’s (Hunter King) frustration will lead to some strategy shifts. She’s made Billy (Jason Thompson) her latest conquest, so she’ll hope to seduce him ASAP.

Summer will eventually shock Billy by pulling him into a kiss. He may pull back and argue that they can’t do this, but Summer will remain confident. Once she’s given Billy a little taste, Summer won’t think he can truly stay away.

Next, Jack (Peter Bergman) will grow closer to Phyllis (Gina Tognoni). These exes could also be heading into risky territory, so some romantic shakeups may be brewing. In the meantime, Ashley (Eileen Davidson) will reach out to Neil (Kristoff St. John). She’ll be so sorry about Hilary (Mishael Morgan) and all the chaos surrounding the accident.

The Young and the Restless spoilers say Neil will lean on Ashley for support. They recently decided to stick with friendship, but maybe their relationship will become more after all. Elsewhere, Nate (Brooks Darnell) will have to help with Victor’s (Eric Braeden) predicament. He’ll get caught in the middle of a crisis, but he should get used to it. That’s what life in GC’s going to be like!

Later, Victor will push for a truce. Will it be with Neil? They hit a rough patch after Neil used Ashley’s inside info, but maybe Victor will decide to let it go. He might have a task he needs Neil to accomplish.

Over with Devon (Bryton James), he’ll want Lily (Christel Khalil) thrown in the slammer for 20 years. Cane (Daniel Goddard) will do everything in his power to keep Lily free and with her family, but it won’t be easy. The Young and the Restless spoilers say Hilary’s (Mishael Morgan) death will drive Devon down a dark path.

Across town, Billy will make a confession. He’ll reveal at least a little info about his top-secret project. It turns out Billy’s opening some new Jabot boutiques, which Lauren (Tracey E. Bregman) won’t appreciate. Y&R fans can expect Lauren to take drastic action, so she may retaliate by joining Nick (Joshua Morrow) at Dark Horse.

Speaking of Nick, he’ll have another showdown with Victor. They’ll discuss the J.T. (Thad Luckinbill) impersonation plot and the road Nick’s on. If Victor’s new plan pays off, he’ll think Nick’s going to regret this dangerous game!

It looks like some hot scenes are coming up this week. We’ll give you updates as other Y&R news emerges. Stay tuned to the CBS soap and don’t forget to check CDL often for the latest Young and the Restless spoilers, updates, and news.