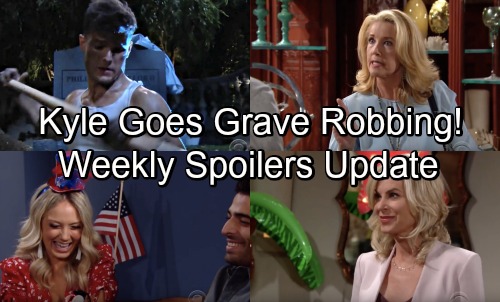 The Young and the Restless spoilers update for the week of July 2-6 tease that some hot episodes are on the way. Several big shockers are ahead, so let’s talk about all the drama. First, Jack (Peter Bergman) and Kyle (Michael Mealor) will join forces. If they’re going to sue Jill (Jess Walton), they have to be prepared. Jack needs to put Dina (Marla Adams) on the stand, but that obviously comes with risks.

Kyle and Dina have formed a friendship, so he’ll hope he can help her get ready. During a mock trial, Dina will be surprisingly lucid. She’ll recall her affair with Phillip Chancellor (Donnelly Rhodes), so Jack will feel good about his chances in court. Sadly, Dina’s mind will soon drift into chaos and confusion. She’ll become agitated over the whole ordeal, which means Jack may have to nix the plan.

However, Kyle will have another strategy to try. It looks like he’ll leave his dad in the dark and carry out his plot alone. Y&R’s weekly promo shows sweaty Kyle with a shovel. Jill’s blocking the exhumation, but it seems Kyle will take matters into his own hands anyway. He’ll apparently try to dig up Phillip’s remains, but word has it he may get busted.

Other Young and the Restless spoilers say Ashley (Eileen Davidson) will make an unexpected decision. She’ll announce that she’d like to make a Jabot comeback, so trouble could be brewing for Billy (Jason Thompson). He’s about to fall deeper down the gambling hole, so Ashley may use that against him.

Over with Hilary (Mishael Morgan), she’ll knock on Neil’s (Kristoff St. John) door and find someone else instead. The Young and the Restless spoilers say Brooks Darnell will take on the role of Dr. Nate Hastings, Jr. He’ll be staying at Neil’s (Kristoff St. John) place while he secretly cares for Victor (Eric Braeden). A shirtless Nate will flash those pearly whites and catch Hilary off guard.

Of course, we’ll also see a Y&R Independence Day celebration. That’ll bring fireworks, fun and a fierce faceoff. Nikki (Melody Scott Thomas) will once again quarrel with Arturo (Jason Canela) and Abby (Melissa Ordway) this week. Fortunately, they’ll ignore her and heat up their romance with a sex session. Nikki can’t stop them from steaming up the screen!

Later, Nikki will deal with a far worse problem. She’ll be with Sharon (Sharon Case) when J.T. (Thad Luckinbill) seemingly appears outside. They’ll shriek in terror as he peers in he window, so stay tuned for all the chaos. We’ll give you updates as other news comes in. Stick with the CBS soap and don’t forget to check CDL often for the latest Young and the Restless spoilers, updates, and news.