The Young and the Restless Spoilers: Sharon and Nikki Freak as J.T. Appears at the Window – Cover-up Crew Fears Vengeful Wrath

BY Marcy Cohen on July 1, 2018 | Comments: one comment
Related : Soap Opera, Spoiler, Television, The Young and the Restless 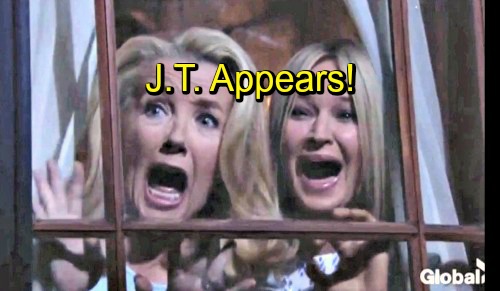 The Young and the Restless (Y&R) spoilers tease that more drama’s ahead for the girls’ night gang. They never knew an evening of gabbing and drinking could end up like this. J.T.’s (Thad Luckinbill) death set a shocking chain of events in motion. The mayhem’s far from over, so the ladies will have to stick together.

Victor’s (Eric Braeden) security footage will really leave Nikki (Melody Thomas Scott) and Victoria (Amelia Heinle) on edge. J.T. has a pretty distinct look, so they’ll genuinely believe it could be him on the tape. Y&R spoilers say Victoria and Nikki will call another meeting. Once they reveal what they saw to Phyllis (Gina Tognoni) and Sharon (Sharon Case), a fierce argument will break out.

Phyllis will remain somewhat skeptical, but she’ll agree that she’d some definitive answers. With that in mind, Phyllis will think they only have one option. She’ll want to head back to the park and dig up the corpse. Phyllis may suggest that they can do it at night and slip under the radar just like before.

Sharon, Nikki and Victoria will quickly shoot that plan down. They’ll worry about what might happen if they get caught. Even if nobody spots them, they could stir up suspicions by disturbing the ground again. Plus, they’ll hate the idea of seeing J.T.’s decomposing body – or worse, nothing at all! They won’t want to face the possibility that J.T.’s indeed back for revenge.

Nevertheless, Phyllis will stick to her guns. She might be able to win them over, but they may not even have a chance to grab their shovels. The Young and the Restless spoilers state that J.T. or someone who looks like just him will appear in the flesh. Nikki and Sharon will scream as they gaze out the window. They’ll fear J.T.’s wrath, but what’s the real story here?

It’s possible someone knows the truth and is gaslighting the cover-up crew. Then again, this could all be a scheme from someone in the dark on J.T.’s death. Either way, it’s tough to believe J.T. rose from the grave. This guy could be a doppelganger like Marco (Peter Bergman) or perhaps the one they buried was J.T.’s evil twin.