BY Marcy Cohen on September 8, 2018 | Comments: one comment
Related : Soap Opera, Spoiler, Television, The Young and the Restless 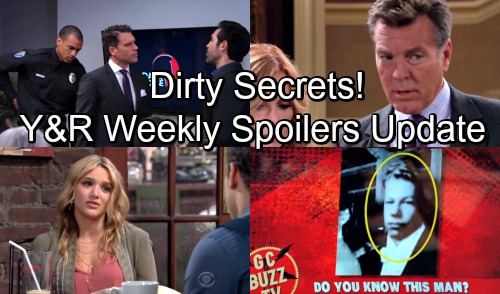 The Young and the Restless (Y&R) spoilers update for the week of September 10-14 reveal that several Genoa City residents will face predicaments. For starters, Nick’s (Joshua Morrow) plans will end in disaster. He’ll be excited about the Dark Horse launch, but the gathering will bring some major secrets out in the open.

Rey’s working with the GCPD on the J.T. (Thad Luckibill) case. He was apparently brought in by Paul (Doug Davidson), so that news should surprise Sharon (Sharon Case) and the rest of the cover-up crew. Thanks to Nick’s impersonation scheme, Rey will believe he was behind J.T.’s disappearance. An arrest will be made, so Nick will face a serious legal jam by mid-week.

Y&R spoilers say Brittany (Lauren Woodland) will return to GC soon after. She’ll hope to keep Nick out of prison and clear this mess up. While Brittany works on that, Jack (Peter Bergman) will focus on another tough task. He’ll pass around a photo and hope it sparks a glimmer of recognition for someone.

After briefly believing Lauren’s (Tracey E. Bregman) dad could be his as well, Jack will ultimately dismiss the possibility. It seems there’ll be proof that suggests otherwise. Once Abby (Melissa Ordway) takes the photo on GC Buzz, Victor (Eric Braeden) will believe he has the answer. He’ll think the man next to Dina (Marla Adams) is Albert Miller (George Kennedy), his own father!

Other Young and the Restless spoilers say Victoria’s (Amelia Heinle) walls will crumble. She’s been stressed out to the point of panic attacks lately, so she’s clearly in a dark place. Victoria needs to open up or she’s going to go mad. She probably won’t spill the whole J.T. story, but she can at least drop her guard and let someone in. There’s a good chance Nate (Brooks Darnell) will offer a shoulder to cry on.

Over with Billy (Jason Thompson), he’ll press his luck and possibly go home a loser. His trip to Las Vegas will conclude with a shocker, so Phyllis (Gina Tognoni) should be concerned if things don’t pan out. Billy could be tempted to get back in other tournaments and win back what he’s lost. Kyle’s (Michael Mealor) sneaky plan could feed Billy’s gambling addiction and take him down a bad path.

Speaking of Kyle, he’ll get some action at last. At least he’ll hope that’s how the night goes. Summer (Hunter King) agreed to have sex with Kyle since she couldn’t win the Billy bet. However, she’ll be a bit of a tease when the big night arrives. Kyle had better be careful or Summer could cheat him out of his winnings – of course she doesn’t exactly seem like a prude!