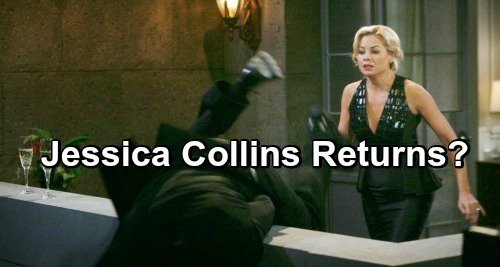 The Young and the Restless (Y&R) spoilers tease that some startling shifts are ahead. As changes happen behind the scenes, it won’t be long until those changes hit the screen as well. There’s been a flood of new characters lately, so that’s most likely a mistake Y&R will want to correct. They introduced too many fresh faces in a short amount of time and that didn’t please most fans.

Of course, there’ll undoubtedly be a few characters that survive the inevitable cast cuts. Some newbies are worth keeping and others are probably not. The show will need to handle this on a case by case basis. However, a good chunk of the new batch could go and that may leave some major holes.

The Young and the Restless has lost several key female players like Melissa Claire Egan (Chelsea), Mishael Morgan (Hilary), Christel Khalil (Lily) and Eileen Davidson (Ashley). They might work on getting some of them back, but there are certainly other options to consider. One of those options might be securing Jessica Collins’ return as Avery Bailey Clark.

Collins recently announced her acting comeback, so she might be ready to hit Genoa City again. Now that Summer’s (Hunter King) gone, Phyllis (Gina Tognoni) could use some family in town. Having her sister back could be helpful, especially after all the J.T. (Thad Luckinbill) drama blows up.

Collins was popular in the role of Avery and she’d serve as a familiar face. Familiarity would definitely be a good thing right now. That’s always a positive plan when you’re dealing with huge shakeups. Collins left the show in 2015, so her return would bring excitement without the risk associated with newbies. Debuts bring backlash, but comebacks are almost always welcome.

Y&R’s new head writer, Josh Griffith, has served in the position before. During one of his previous stints, Griffith kept Avery front and center. He clearly enjoyed writing for the character, so it’s easy to imagine him pushing for her return. Since Phyllis and Nick’s (Joshua Morrow) reunion seems rushed and doomed, maybe Avery could be a love interest for Nick again.

The show could even go for a Phyllis, Nick and Avery triangle. They could get some great drama out of it. Regardless, it’d be nice to see Avery back for a new storyline. Would you like to see Avery return to GC?

While filming in Atlanta, I had another project simultaneously moving forward and here it is… MY NEW BLOG!… 😀https://t.co/NwGLhdqDJJ

UP & RUNNING and so excited to interact with you!