The Young and the Restless Spoilers: Y&R Alum Accuses Seal of Sexual Battery

BY Olivia Marie on January 16, 2018 | Comments: one comment
Related : Soap Opera, Spoiler, Television, The Young and the Restless 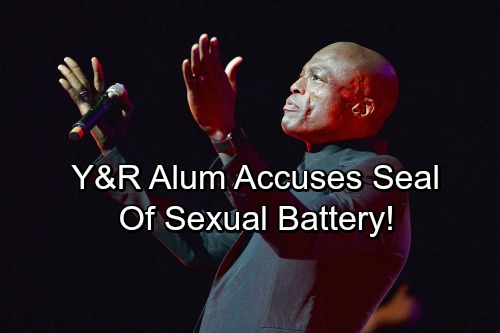 The Young and the Restless (Y&R) spoilers reveal that a Y&R alum is leveling some serious accusations. According to TMZ, Seal is now under criminal investigation for sexual battery. He recently spoke out against sexual misconduct in the media and urged women to tell their stories.

That’s what ultimately led the accuser to come forward. Tracey Birdsall was a guest star on The Young and the Restless back in 2012. She filed a report detailing her allegations on Saturday. Birdsall lived near Seal in 2016, which led to a friendship. However, she insists things escalated after she stopped by to retrieve a salad spinner she had loaned.

Birdsall claims Seal suddenly planted kisses on her and began groping her breasts. She alleges that Seal also mocked her attire and eventually came at her again. Birdsall contends that she later left Seal’s home and never reached out to him after that. After seeing Seal object to sexual misconduct in the news, Birdsall decided she wasn’t willing to stay silent any longer.

Seal’s rep gave TMZ his response to Birdsall’s claims and the criminal investigation. The singer maintains his innocence and plans to fight this. “Seal vehemently denies the recent allegations made against him by a former neighbor for alleged misconduct more than a year ago,” the rep said. “He intends to vigorously defend himself against these false allegations.”

As for what’s next in Genoa City, The Young and the Restless spoilers say the drama will continue to heat up. Many crucial characters will face ups and downs in the coming months. Several big storylines will bring twists and turns, but let’s hope there are no major scandals behind the scenes. If other investigations with Y&R ties emerge, we’ll be sure to keep you informed.

What do you think about the sexual battery allegations against Seal? What about the other celebrities in the news who have recently been accused? Share your thoughts in the comments below! We’ll give you updates as other Y&R details emerge. Stay tuned to the CBS soap and don’t forget to check CDL often for the latest Young and the Restless spoilers, updates and news.

Oh I forgot, that’s right…..you’d heard the rumours but you had no idea he was actually serially assaulting young stary-eyed actresses who in turn had no idea what they were getting into. My bad. #SanctimoniousHollywood

When you go to your local Indian Food place, and they expect you to pick! #choices #LalMirch #NeverEnoughIndianFood