The Young and the Restless Spoilers: Y&R Moving Forward Without Lily and Hilary – Better or Worse? 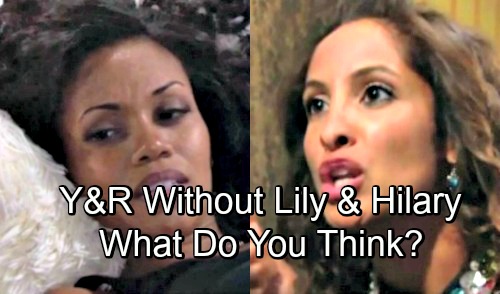 The Young and the Restless spoilers documented the five-year war between Lily (Christel Khalil) and Hilary (Mishael Morgan). With Morgan already having left the cast and Khalil dropping to recurring status, a combined question comes to mind. Will Y&R be better off without Hilary and Lily?

This is a two-fer query. The idea isn’t how Genoa City would be if Hilary, or Lily wasn’t in it. Following the off-screen decisions that led to two on-screen changes, viewers are being asked if Y&R will, or won’t, be better off without both characters?

Khalil joined the cast in 2002. She was 15 during that year. Since then she went on to earn four Daytime Emmy Award nominations, capturing 2012’s top prize in the Outstanding Younger Actress in a Drama Series category.

Morgan debuted on Y&R in 2013. She earned a nomination in the Outstanding Supporting Actress in a Drama Series category this year (2018). It would be easy to project her as a top contender for, or winner of, a Daytime Emmy next year for the work she just completed.

The assertion isn’t that Khalil, or Morgan, are poor actors. Quite the contrary, as Khalil’s consistent efforts through the years and growth from a teenage actor to an early middle-aged adult performer has been solid.

Morgan went beyond the script pages, obviously applying her own vigor to a role that became memorable. Hilary isn’t replaceable.

So, how could Y&R be better off without two good actors in roles that many within the audience embraced?

Soap operas are a daily grind for all employed and the fans. Truly devoted viewers never miss an episode, watching shows while they are broadcast, via time-shifted digital recordings, modern streaming methods on a variety of devices, or some combination of all three methods. Those fans, which represent the major percentage of any soap’s audience, know when a storyline, or some characters have been played out.

Khalil hasn’t left the cast. She’s simply adjusted her contract, which means Lily won’t be on as much. This will force Daniel Goddard’s character, Cane, to stretch. It will also afford possibilities for Noah Alexander Gerry (Charlie) and Lexie Stevenson (Mattie) to face new challenges without their mother’s consistent presence.

The Ashby family’s dynamic will now change. In time, Khalil could always return to her regular status as well.

Morgan left the Hilary role behind. Y&R opted to write Morgan’s alter ego off in dramatic fashion due to the finality of this actor’s current career decision. Bryton James (Devon) will subsequently be given a new path to explore. That will allow the fourteen-year cast veteran to explore different adventures, likely with a new romantic interest. In other words, he won’t be Hilary’s significant other any more.

So, the change in Khalil’s status and Morgan’s exit most impacts the actors who they worked with. That reality allows remaining cast members and those who will join them to create new soap, which can keep viewers engaged if done right.