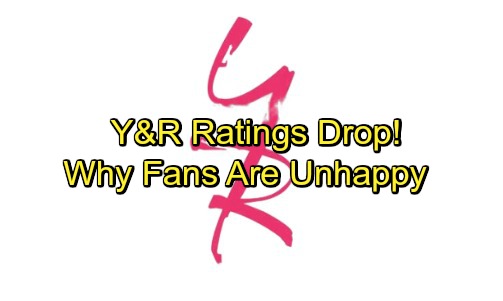 The Young and the Restless (Y&R) spoilers continues discontent among some segments of Y&R’s audience and cast. It will always be impossible to know exactly how every single fan, among the five million-plus live daily viewers in the United States and Canada, feels about the show. However, television ratings remain a logical measure that helps to determine how recent, dramatic changes are affecting the fans.

Mishael Morgan (Hilary) voluntarily exited the cast in the summer. Eileen Davidson (Ashley) will be voluntarily exiting the cast in October, whatever that really means. Doug Davidson (Paul) recently revealed that he was dropped to recurring status last January and is not currently scheduled to record further episodes.

Christel Khalil (Lily) publicly stated that she voluntarily chose to drop to recurring status – okay? She also advised that Y&R asked her to remain full-time. And where is fan-favorite Christian LeBlanc (Michael Baldwin)?

Lauren Woodland (Brittany) rejoined the cast in the summer. This familiar face, which hadn’t been seen in years, is on a recurring contract. Kelly Kruger (Mackenzie) also returned this summer and may be seen again, based upon the very controversial and still unresolved arc involving J.T.’s (Thad Luckinbill) death.

Alice Hunter has joined the cast as Kerry Jones. She will become Jabot’s chemist this fall, thereby replacing Ashley.

Arturo had a romantic connection to Nikki (Melody Thomas Scott), which didn’t seem to be well-received by the fans. However, he’s since moved onto Abby (Melissa Ordway), which has generally settled viewer reaction to him.

Rey has seemingly supplanted Paul as the leader of the GC Police Department. That change hasn’t been digested by a wide swath of hardcore Y&R fans. Time will tell if this particular character is accepted due to that plot point alone.

Lola has literally pushed Summer (now played by temporary recast Bayley Corman) out of Kyle’s (Michael Mealor) love life. Fans were strongly opposed to the re-imagining of the character Hunter King has played until now.

Corman’s presence is yet to be felt and is being presented as momentary, while King fulfills her Life in Pieces nighttime sitcom contract obligations. All the while, Lola is receiving instant acceptance based, in part, on the fact that she isn’t Summer (in either actor’s edition).

Jack’s (Peter Bergman) paternity storyline has certainly irked many longtime viewers. But if Mr. Abbott proves to be Victor’s (Eric Braeden) brother there’s no telling how evolving reaction will be labeled, as both veteran actors would be pitted against each other in a way that has never been seen before.

Billy’s (Jason Thompson) return to gambling, Nick’s (Joshua Morrow) morph to an Adam-like (meaning the Michael Muhney version) personality, and Shick’s wedding being threatened by Sharon (Sharon Case) withholding information about the J.T. matter and due to Phick’s impulse hook-up are all debatable storylines.

Y&R averaged approximately five and a half million viewers per day during the 2017-18 television season, meaning that number of people were watching the show as it was broadcast. Time-shifted digital recordings, including streamed views, are added separately to the North American total.

Through the summer months Y&R was only averaging slightly over five million live viewers per day. The maintained loss of a few hundred thousand viewers into early September can not be blamed on travelers who took time away from their soaps. Vacation season is over, but the drop in ratings hasn’t yet been reversed.

Vast cast upheaval, combined with strongly questioned plots have apparently driven approximately five percent of Y&R’s audience away. However, if the ratings drop represents the continuation of a pattern, then that will indicate that there have been too many changes in the cast and in the storylines – and in the direction Mal Young has taken the show.

Victor Newman’s portrayer, Eric Braeden has made clear where he stands on Y&R’s direction, he clearly is not afraid of any reprisals from management. CDL is a leading source for everything linked to The Young and the Restless. Check back regularly for Y&R spoilers and news!