The Young and the Restless Spoilers: Y&R Star Off the Market – Engagement Announced 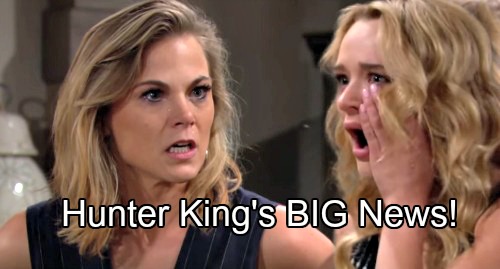 The Young and the Restless (Y&R) spoilers reveal Hunter Haley King, who portrays the trouble-making seductress, Summer Newman on the CBS daytime drama has gotten engaged to her beau of over two years, Nico Svoboda.

Y&R star and Hunter’s costar, Melissa Ordway (Abby Newman) took to Instagram, revealing a picture from the celebration and thanking the couple for including them in their special day. Hunter happily shows several photos of the beautiful ring Nico gave her. All of us here at CDL extend our heartfelt congratulations to the couple!

As fans of The Young and the Restless know, Summer Newman flew back into town like a hurricane, causing trouble everywhere she went. Her carefree and vengeful attitude, reminded long-time viewers of just how much Summer is acting like her mother, Phyllis Summers (then-Michelle Stafford) was when she first arrived in Genoa City.

The Young and the Restless spoilers tease that Summer is on a mission to destroy her mother, although her motives behind the revenge are unclear; there is no mistaking Summer has her eyes set on Phyllis’ (now-Gina Tognoni) live-in lover, Billy Abbott (Jason Thompson) and is willing to literally do anything to be with the man.

The Y&R spoilers for the week of Monday, August 20 – Friday, August 24 reveal Summer plans to follow Billy while he is on a business trip and she is determined to bed him. Her partner in crime, Kyle Abbott (Michael Mealor) will take steps to stop her; but it seems his good intentions will not have a happy ending. Y&R fans will have to turn in to see how everything unfolds as a furious Phyllis attempts to deal with her devious daughter.

SHE SAID YES!!! 💍 @hunterking I’m so excited for you and @neekotto!!!! Thank you for letting us be a part of your special day! Congratulations on your engagement! Love you both!!!👰🏼🤵