BY Heather Hughes on May 25, 2018 | Comments: one comment
Related : Soap Opera, Spoiler, Television 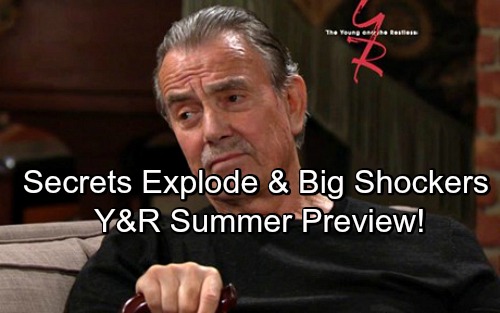 The Young and the Restless (Y&R) spoilers tease that we’re in for one hot summer on the CBS soap. Y&R has some great storylines in the works, so expect plenty of scorching shockers. There’s sure to be a little something for everyone! Take a look at our summer preview to see what you can look forward to.

First, let’s talk about the return of a troublemaker. Hunter King will reprise the role of Summer Newman starting June 4. The Young and the Restless spoilers say Summer’s comeback will cause big problems for Phyllis (Gina Tognoni). This mom will have to bail her daughter out of jail, but that’s the least of her worries. It looks like Summer’s intrusion will also create issues in Phyllis’ romance.

Billy (Jason Thompson) will do some feuding at home as well as at the office. He’ll have to stand up for what he believes in at Jabot, but his risks may pay off. The Young and the Restless spoilers say Billy will really shake up the corporate world. Speaking of corporate shakeups, we’ll see some over at Newman Enterprises. Victor (Eric Braeden) will pit his kids against each other as part of a sneaky plan.

Nick (Joshua Morrow), Victoria (Amelia Heinle) and Abby (Melissa Ordway) will all be stuck in conflict soon. However, Victor will face a curveball of his own. He’ll trust Nick with a family secret, but that may not be the best idea. This secret will ultimately get out, so Victor will have to do some damage control. Y&R fans can expect Victor to fight for his legacy and wipe out anyone who stands in his way.

Of course, there’s another huge secret just waiting to be exposed. The cover-up crew will deal with more pressure this summer. A stunning twist will change everything, so viewers should be on the edge of their seats. Phyllis, Victoria, Sharon (Sharon Case) and Nikki (Melody Thomas Scott) will continue to be haunted by J.T.’s (Thad Luckinbill) death. Their alliance will definitely be tested by what’s next.

Perhaps someone surprising is already in the loop on the truth. Whatever the case, Sharon will struggle to keep her relationship with Nick intact. Old trust issues will resurface as Sharon piles on the lies, but Nick just might hide a few facts of his own. His return to Newman is bound to bring bad decisions.

Other Young and the Restless spoilers say Devon (Bryton James) will finally take a chance on romance. He’ll cautiously reunite with Hilary (Mishael Morgan), but the road ahead will be a bumpy one. It always is when Hilary’s involved!

Finally, Charlie (Noah Alexander Gerry) will get the opportunity to play the hero. Shauna (Camryn Hamm) will face some dangerous difficulties at home, so Charlie will step up to help. He’ll earn her gratitude and create a stronger spark in the process.

There’s a sneak peek at this summer’s action! Which sizzling plots are you excited about? We’ll give you updates as other Y&R news comes in. Stay tuned to the CBS soap and don’t forget to check CDL often for the latest Young and the Restless spoilers, updates, and news.