BY Dorothy Gale on November 20, 2018 | Comments: Leave Comments
Related : Recap, Television, This Is Us, TV 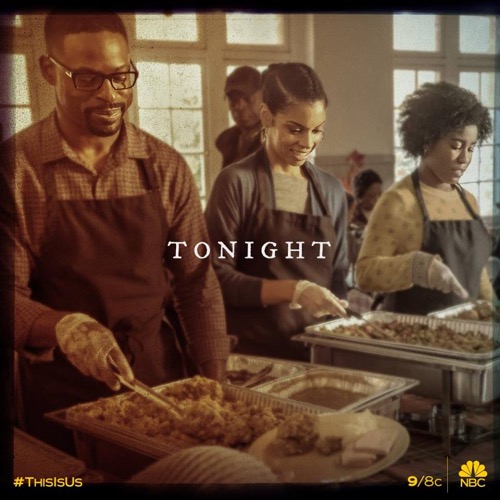 Tonight on NBC their new honest & provocative dramedy series This Is Us airs with an all-new Tuesday, November 20, 2018, episode and we have your This Is Us recap below.  On tonight’s This Is Us season 3 episode 8, “Six Thanksgivings,” as per the NBC synopsis, “The Pearsons have an unconventional Thanksgiving dinner. In the past, Jack, Rebecca and the big three spend Thanksgiving with Miguel.”

Rebecca and Jack are preparing Thanksgiving dinner and she says that it is probably going to be the last one where everyone is together. Rebecca says she feels like a traitor having Miguel for dinner when his ex is her best friend.

The children are in the living room, they are teenagers; Kate and Kevin are trying to help Randall answer a question on an application for school. Miguel arrives, he is on the cell phone with Shelly and having an argument.

Jack and Miguel talk, Miguel is beating himself up about being there for his kids. Jack tells him not be so hard on himself, but he needs to show his kids that he is still their father.

Fast forward to present day, Randall is getting dressed and talking to Beth. Beth is worried that maybe Toby and Kate might not be up to making dinner.

Kate and Toby arrive, Beth tells them that Tess isn’t feeling well. Beth, Randall, Amy, and Deja head to a soup kitchen to help out. Deja got a message from her birth mom and her cell phone and doesn’t tell anyone about it.

Randall gets into an argument with his campaign manager about the location where they are donating their time, but he won’t listen to it because it was Beth’s idea. Beth overhears and she is not happy.

We look back at Jack’s days in the war, he looks over at a woman and her son. A chopper arrives with hot turkey for the troops. The men share a meal, Jack is writing a letter at the same time. His brother is there, but he won’t sit with everyone. Jack takes some of the food and brings it to the woman and the child. Jack goes in her hut to see the child and notices that he is not well, He has a cut on his foot and a fever, Jack goes to get his brother to help.

Jack asks his brother to clean and dress the wound, he refuses and says he is not going to save a kid so he can grow up and kill an American one day. Jack does his best on his own when his brother runs out of the hut. When Jack is done he tells his bother that he was just a kid and he needs to wake the hell up.

Jack’s brother tells him a story about what happened to him when he first got there that traumatized him and he could be nice to the locals all he wanted, but they are not just women and children, they will turn on them in an instant.

We now go back to Randall’s birth father William and when he first met his partner Jessie. William is playing at the piano and Jessie is watching him. Fast forward to another time when William bumped into Jessie coming out of an alcohol store and offered to buy him a meal. Over the meal, Jessie tells him that he lost everything over cocaine. His marriage to his wife was a mismatch and he has a sister in Chicago.

He goes on to say that Thanksgiving depresses him; he was invited to his sister’s house, they will ask him how he is doing and he doesn’t want to lie. William invites him to a gathering later that day where he will be playing the piano.

Toby and Kate are making dinner, Toby is lacking confidence and Kate perks him up. Toby brings up a meal for Tess who is not feeling well, turns out she started her period and Tess talks to her. Kate tells her an embarrassing story about her first time to make Tess feel comfortable. Kate tells Tess that she is going to soon have her first boyfriend, Tess says, or girlfriend.

Present day, Rebecca and Miguel are in the car heading to Thanksgiving dinner with his family. Miguel’s son is bring rude to Miguel and Rebecca, Miguel tells him that he tried to stay close to him and his sister, but they didn’t reciprocate and he gave up. Miguel tells him to take all the shots he wants at him, but he is to respect his wife.

Toby dropped the turkey and improvised by going out and buying takeout.

We get a glimpse at Happy Thanksgivings past and future.

Deja replies to her mother’s text and tells her Happy Thanksgiving.

Rebecca and Miguel arrive at Toby and Kate’s dinner.

Young Randall finished his letter for the application to the school.