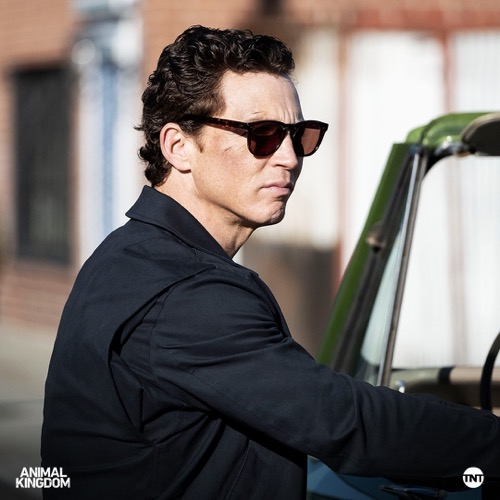 Tonight on TNT Animal Kingdom returns with an all-new Tuesday, June 25, 2019  episode and we have your Animal Kingdom recap below. On tonight’s Animal Kingdom season 4 episode 5 “Reap,” as per the TNT synopsis, “Pope learns disturbing details about where Smurf has been, and the revelation puts Angela’s spot in the house in jeopardy. Adrian’s return to Oceanside leads to a confrontation with Deran, as J lays the groundwork for a new job..”

A young Janine is learning how to drive fast in a parking lot with the help of Colin.

In the present day, Pope is brought in to talk to the doctor. He tells Pope that Smurf has aggressive melanoma. Meanwhile, J has tracked down Mia with a gun in hand. He tells her that the stunt she pulled at the house is going to cost him. He tells her to stay away. She asks him if Smurf really has his back and if his family knows all about his side gigs.

Pope brings Smurf home. They talk about her cancer in the car. She tells him the brothers cannot know.

Manny and Lou are sitting in the woods by the fire. Lou questions Colin and Janine. Pedro tells him to stand down.

J meets with Deran at the bar to talk about a possible new job. J takes off leaving the guys and the bar to watch Adrian win a surf competition on TV. Deran tells drinks on the house.

Angela is eating cereal when Smurf comes in. Smurf yells at her for the dirty dishes. Angela starts to pack. Pope stops her, telling her it’s his house too. Pope goes to Smurf and tells her he will keep her cancer secret but Angela stays.

J arrives to meet Olivia. Meanwhile, Angela moves in Craig’s old room. They talk about why the Pope stayed all of these years. He offers her a ride to work when she gets to close to him.

On the couch, Olivia asks J if he is a virgin. They start to get intimidated when her mother comes home.

Back at home, Craig is drinking and wallowing about Frankie and the job. Smurf finds Pope angry in the garage over the mess of tools. She thinks it is because she is sick. He tells her that the day she dies it will be the happiest day of his life. He heads to Angela’s room. He looks sad. Angela asks if Smurf is sick. He doesn’t answer. She kisses him. Smurf listens at the door.

J wakes the next morning to see Olivia’s mother working in the kitchen. They talk. She discusses her work. She is putting together a list of things celebrity’s want in their gift basket for an upcoming event. He can help if he wants, she is always looking for smart people. J tells her yes.

Adrian arrives at the bar to everyone celebrating. Deran doesn’t look happy.

In the past, Janine tells the guys about where they can pull off their next job.

Frankie brings Smurf cash. She tells her about the boys and the job and her new client with steady work. Smurf isn’t happy. Craig should have told her that Smurf likes to be asked for permission rather than forgiveness.

In the past, Manny tells the gang about a piece of property in Crescent City. Colin tells them they are going south not north. The guys agree reluctantly after they realize its Janine’s idea.

At the family bbq, Smurf tells the boys she wants her money from the job with Frankie. She knows they didn’t get their full cut. It starts a fight among Pope and Craig. The guys head out to get their money.

Adrian meets with his lawyer. He has to talk to a detective. The detective comes in and asks about Deran Cody right away.

Deran and Craig get the billionaire to go on a bike ride. He dumps his bike. Pope and J are waiting. Craig demands his watch to pay for his bill. They take it and leave him on the ground.

Janine asks Manny what his problem is with her and how she wants to make money.

On the way out of the arcade, J is attacked by Tupi. He manages to grab his gun after they fight on the ground. Tupi runs off.