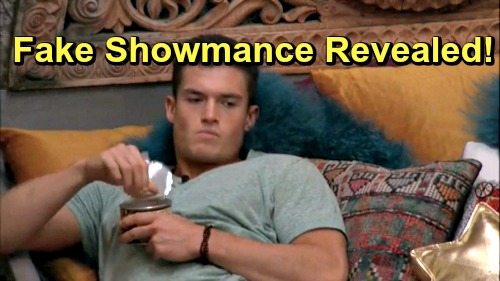 Big Brother 21 (BB21) tease that the Power of Veto competition brought out some emotions, while Jackson Michie admitted that he’s slept with Kathryn Dunn, but “she isn’t his type.” Christie Murphy begins to have second thoughts about backdooring Kemi Fuknole.

After a very long POV competition, the houseguests return and everyone seemed pretty pumped up. Kathryn Dunn was not one of them though. She was upset and crying about losing the competition. She wanted to win so she could save herself and not depend on anyone else to use the POV on her.

Upstairs in the HOH room, Christie and Jackson chat about Kathryn. BB21 spoilers tease that Jack admits that “they did it” but she isn’t his type. Apparently, he enjoys being around her and she is sweet, but nothing will ever come of their relationship.

Jackson said multiple times that he isn’t in a showmance with her and he has no genuine feelings for her. It was heartbreaking to hear him deny having feelings for her, considering she seems to be falling for him.

Later, Jackson approaches Kathryn downstairs. He tells her that she can trust him (umm what?) and that he will always be there for her while in the house. Big Brother 21 spoilers tease that she admitted to feeling emotional and she hates not having control of the game.

Kathryn asked Jackson If he knew whether Sam Smith is planning on using the POV. He wasn’t sure but he would try to find out for her.

The BB21 fans know that the plan just before the POV competition was to pull one of the nominees and backdoor Kemi, but that plan could be falling apart.

Christie is having second thoughts about backdooring Kemi. She worries that if Sam uses the Veto on Cliff Hogg III that Kemi could stay in the house over Kathryn. And, she isn’t sure how everyone will be voting.

Her biggest fear is playing too hard and outplaying herself which would head to her eviction. And, her fear is completely understandable considering how the camp director voting went down on the Season Premiere.

Do you think Christie will put Kemi up if the POV is used? Don’t forget to come back to CDL later for more Big Brother 21 (BB21) spoilers, news, and live feed updates!