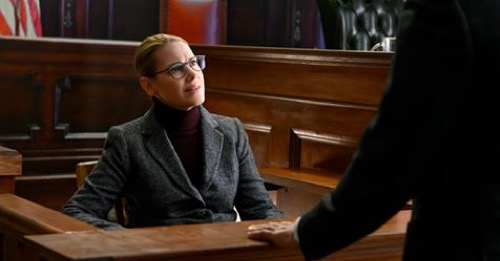 Tonight on CBS their drama Bull inspired by Dr. Phil McGraw airs with an all-new Monday, January 21, 2019, episode and we have your Bull recap below.  On tonight’s Bull season 3 episode 12 called, “Split Hairs,”  as per the CBS synopsis, “Bull mounts the defense of New York City’s chief medical examiner, Julia Martin, when she is charged with tampering with evidence tied to the years-old case that made her career.

As Bull worries that his client’s propensity for brutal honesty could affect her chances in court, he aims to fill the jury with individuals inclined to believe she made a mistake rather than conspired to tamper with forensic evidence.”

Benny found their latest case. He wanted to represent the Chief Medical Examiner of New York City because he knew her and he didn’t believe the Julia Martin he knew could ever have tampered with the evidence in the biggest case of her career. There was just one problem with Benny wanting to represent Julia and that was never called him. Benny had heard of the case through a third-party and had talked to Bull about it all without Julia’s consent. She didn’t have the money for such a big firm and it was the first thing she mentioned when Benny did visit. He told her that he believed she was innocent and he asked for a run-through on the case because he was hoping Julia’s statement would be enough to get Bull on board.

Bull wasn’t even sure he wanted to take the case. He remembered that five years ago there had been a man dubbed the Bathroom Stall Butcher. This Butcher would wait in the bathroom for women in order to rape and strangle them. He never left behind any forensic evidence and it didn’t seem like his reign of terror was ever going to end, but then came the evidence. The Chief Medical Examiner had found a pubic hair at the back of the latest’s victim throat and she ran it for DNA. This hair proved that John Malfred was Bathroom Stall Butcher and the man was convicted on this evidence. It was a win for the city and a win for Dr. Julia Martin. Her career took off after she closed this case and so for it to be undone meant Julia must have made a mistake.

Bull tried to get Julia to admit to this mistake because there was evidence she was in the wrong. The hair had been tested again and this time it didn’t belong to Malfred. Therefore, the doctor either made a mistake of she willing forged evidence against an innocent man. Bull didn’t know what he thought and so he tried to get Julia’s read on things. She said that she went through everything herself and that the evidence couldn’t be wrong because she was never wrong. Julia was so sure of herself that Bull agreed to take the case because he didn’t think a woman as prideful as Julia would ever fake the evidence in a case to get a conviction. Not when she was willing to go jail rather than admit she was wrong.

Julia claims that she found a lone piece of hair after hours of searching for evidence. She also explained that she erased the fact she hadn’t found anything on the first search from the system because she didn’t think it was important. Julia was someone that hated letting anyone see her vulnerability and so she wouldn’t have wanted anyone to see how long it took her to find what was in front her. She explained this to her legal team and they did their best to help her. Julia needed to be seen as someone capable of making a mistake because she had been working long hours and was under a tremendous amount of stress. She wouldn’t want to be seen that way, but her legal team thought it was best to pose her in this light to stop the jury from sending her to jail.

Only they couldn’t change Julia. She wanted to take another look at the evidence against her because she still didn’t believe she made a mistake and so she did find something interesting. Julia said that hair she found in the victim’s throat had been pubic hair and that meant it never came into contact with pollen. Then why did the hair that was tested again show that it had pollen? It would have been impossible for it to be the same hair and Julia could even back up her statement because the victim had been killed in December which means it couldn’t have come into contact with pollen naturally. It had to be switched out and so Bull had his team follow the lead as Chunk prepped Julia for her testimony.

Julia needed to testify that she would never have manipulated the evidence. Again, she was supposed to come across as a sympathetic character yet she was very firm. She didn’t lie and she didn’t cheat. Julia didn’t move the ball any one way with her testimony and so the team went about tracking the person that swapped the hairs. They went to go see John Malfred and Bull took instant notice of how little Malfred cared about his trial or Julia’s trial for that matter. He seems content in prison and so Bull didn’t think he was the one pushing the narrative that Julia Martin was wrong. It must have come from someone else and Bull thought it might have something to do with Malfred’s lawyer, Ryan Vance.

Vance had used his own money to test the hair again on some hunch and so it was a little surprise that he was right on his first go. Bull had asked Taylor to look into Vance’s other clients and to see what made Vance wanted to frame Julia. Julia, as it turns out, had been the Medical Examiner on a case involving Vance’s brother. His brother was in jail now and was facing a life sentence if the evidence, as well as Julia’s character, held up. So Vance manipulated things. He paid someone off to switch the hairs and then used that evidence to spark an investigation against Julia because he was secretly trying to get his brother out of prison. And this all came out when Bull had Benny put Vance on the stand.

Vance was forced to testify that he could have paid someone off and that it could have beneficial to his own brother.

The evidence against Vance was so compelling that the state dropped the charges again Julia and she was able to return to her job because as she likes to say she never makes mistakes.