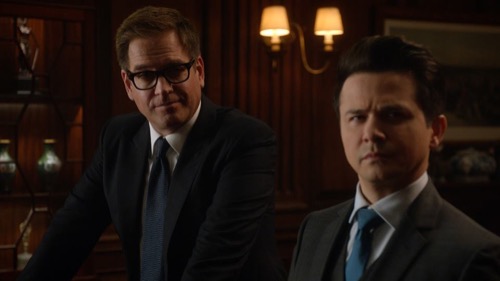 Tonight on CBS their drama Bull inspired by Dr. Phil McGraw airs with an all-new Monday, January 14, 2019, episode and we have your Bull recap below.  On tonight’s Bull season 3 episode 11 called, “Separate Together,”  as per the CBS synopsis, “Bull and his on-again, off-again romantic rival, Diana Lindsay, join forces to create two separate but collaborative defense teams when Diana’s niece and her husband are charged with armed robbery.

As the trial gets underway, Bull’s reunion with Diana is strained by his new post-heart attack regime.”

Six days ago at the Thailand International Airport Newlyweds board their plane. The bride gets a call from her boss. He has forgotten the code to the safe. She gives him hers. She tells her new husband how he is getting old. Later on the flight, a passenger tells her congrats. He heard her good news. They make small talk before sleeping. When the plane lands she cannot find her phone. A woman finds it on the floor.

Today – Bull kisses his lady friend Diana who just flew in. She has an arraignment in 20 minutes. Her clients, one of them is her niece Claire, are up for armed robbery. She needs Bull’s help. In court, the newlyweds are her clients. The judge denies them bail and calls them a flight risk. Behind closed doors, Bull gets caught up to speed. A couple robbed a jewelry store. They look just like the newlyweds and Randy has a record.

After the meeting Bull tells Diana that she is in over her head. She doesn’t know Randy. He can defend him and she can defend Claire. They can work as a team. Diana agrees.

The next day, Marissa tells Benny she talked to Bull about their new case. She is worried. Bull sounds like his old self. Benny tells her not to worry. She updates the team.

Benny heads to the court. He says hello to Diana and finds Bull sleeping in a room off the court. Benny laughs. He has been working a lot and never gets a break. Benny slips in and wakes him. They all walk to the room, Bull briefs them on what type of jurors they want. They get their pool and then drop off Benny. Diana wants to go dancing and Bull sounds like he wants to go to be, but goes anyways. On the dance floor Bull holds her drink and takes a sip. It isn’t long before he is dancing too.

During the night Bull wakes and can feel his heart beating very loudly. He tells Diana he needs to go. She is a little insulted. She thought they were going to spend the night together.

At court the next day, Claire confesses she said the combination to the safe 5 days ago on the plane. Bull questions Randy about a hat found at the scene that looks to belong to him. He tells them again he was in bed with his wife.

Claire’s boss takes the stand and discusses the night of the robbery.

On the stand, Mr. Greene waves to Claire and calls her a sweetheart. He continues to detail the night he was robbed and tells the court how he heard the female robber say – “Randy, stop you’re killing me.” The jury pool goes red. On the way home, Diana gives Bull attitude.

Bull goes to see his doctor and explains about his heart beating loudly the other night. His doctor reassures him he will be okay and he needs to talk to her.

Claire tells Diana that Randy wore his hat home on the plane. He didn’t lose it in Thailand as he said.

They call Randy’s ex-fiancee to the stand. She said they have been talking lately. He called and wanted his ring back, it was his mother’s. He went to get it at midnight and she wouldn’t give it back. The robbery was the same night so Randy lied about being home. Diana questions Randy’s ex and asks if maybe she was there at the robbery. Benny and Bull aren’t happy. They are supposed to be a team. After court, Bull accuses her of stabbing him in the back. They talk to their clients. Randy swears he put his hat in the overhead compartment, possibly, but hasn’t had it since.

After some thinking and digging, they think it could be the man who was with her on the plane. They track him down. Chuck follows him and asks him some questions. He also drops the news that the authorities are going through his apartment now.

Benny, Bull, and Diana get the news that the case has been dismissed. On their way home, Diana asks Bull if he wants to get a drink. He takes her back to the hotel but tells her he is trying not to drink. They can head to her room. She smiles.