BY hellodrdavis on April 21, 2019 | Comments: one comment
Related : Days of Our Lives, Soap Opera, Spoiler, Television 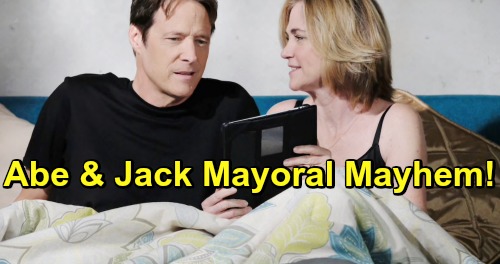 Days of Our Lives (DOOL) spoilers tease that Salem’s next mayoral debate between Abe Carver (James Reynolds) and Jack Deveraux (Matthew Ashford) will be just as eventful as the last one. DOOL viewers will recall that at the last debate, Jack and Eve Deveraux (Kassie DePaiva) outed Haley Chen (Thia Megia) as an undocumented immigrant, effectively destroying Melinda Trask’s (Laura Kai Chen) candidacy for mayor.

But the next debate is sure to have plenty of fireworks as well. Days of Our Lives spoilers say that Jack will pull a shocking stunt during the debate, and it’s sure to leave Abe reeling. Exactly what Jack will do remains to be seen, but it’s likely that it has something to do with relationship that’s developing between Abe and Sheila Watkins (Tionne “T-Boz” Watkins).

Days of Our Lives spoilers indicate that Jack will notice a moment between Sheila and Abe. Of course, Sheila and Abe have been struggling to fight their feelings for each other lately. Abe is in a long-distance relationship with Valerie Grant (Vanessa Williams), but he and Sheila have grown closer and nearly kissed.

It would be just like Jack to make a shocking announcement at the debate about Abe being involved in an “inappropriate” relationship with his employee while he happens to be seeing someone else. Jack could use the information to try to paint Abe as a leader lacking ethics, morals, and good judgment.

The whole scene could be quite damaging for Abe’s campaign, as well as for Abe’s relationship with Valerie, who DOOL spoilers say will make a surprise appearance at the debate to support her beloved Abe. She could be in for quite a shock if Jack outs Abe’s new attraction to Sheila in front of everyone.

But that’s not all that will happen surrounding the mayoral debates. Days of Our Lives spoilers say that JJ Deveraux (Casey Moss) will make some sort of statement to reporters after the debates. He’ll relay some dangerous information about Jack, and it looks like it will be something he’ll regret saying.

Perhaps JJ will blurt out something to the press about Jack’s past – something that everyone has forgotten about from long ago. It could be about the time that Jack raped Kayla Johnson (Mary Beth Evans) all those years ago, or perhaps something else from Jack’s past. Whatever it is, it looks like JJ will speak out in anger and give the press a field day.

It certainly sounds like the debate is going to be action-packed! Are you looking forward to it? Stay tuned to DOOL and don’t forget to check CDL often for the latest Days of Our Lives spoilers, updates, and news.