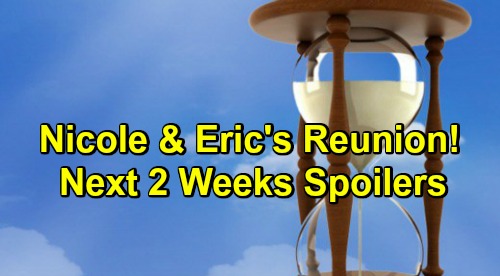 Days of Our Lives (DOOL) spoilers for the next two weeks tease that some bombshells are coming up. During the week of April 22-26, Stefan DiMera (Brandon Barash) will be torn between two women. He’ll hook up with Gabi Hernandez (Camila Banus) a couple times as he seeks something dangerous and exciting, but he’ll remain drawn to Chloe Lane (Nadia Bjorlin) as well.

Chloe sees the good in Stefan and he enjoys bonding with the kids, too. Once the drug cartel drama’s done, Chloe will be ready for their first date. However, she’ll spot a button off Gabi’s blouse and force Stefan to think fast. Fortunately, Gabi will come along with the save and earn Stefan’s gratitude. It’ll make him even more torn, but he’ll be thankful.

Other Days of Our Lives spoilers say Nicole Walker (Arianne Zucker) will return to town. She’ll stun Rex Brady (Kyle Lower) when she shows up out of the blue, so this doc will get her a quick checkup. Once Rex confirms that Nicole’s OK, he’ll probably hear quite a tale. 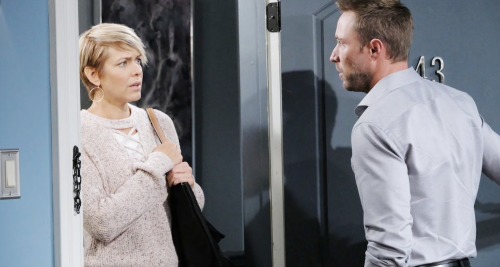 Meanwhile, Sarah Horton (Linsey Godfrey) will pry the truth out of Dr. Marlena Evans (Deidre Hall). She’ll ultimately pry the truth out of Eric Brady (Greg Vaughan) as well. Sarah will get Eric to admit that he has feelings for her, so she’ll share a kiss and figure out what’s next.

At the DiMera mansion, a masked man will enter Holly Jonas’ (Harlow and Scarlett Mallory) bedroom. He’ll kidnap Holly and make a break for it, so that’ll set up more drama later. During the week of April 29-March 3, Days spoilers say Nicole will have an emotional reunion with Eric. He’ll be overjoyed to learn his love survived, but that means heartbreak is headed for Sarah.

DOOL fans can expect a devastated Sarah to lean on Marlena for support. Next, Eric and Nicole’s blissful bubble will burst as they realize Holly is gone! It looks like Ted Laurent (Gilles Marini) and his partner in crime will be behind this mess. Ted’s true motives will be exposed before long, so don’t miss the extent of his shady agenda. 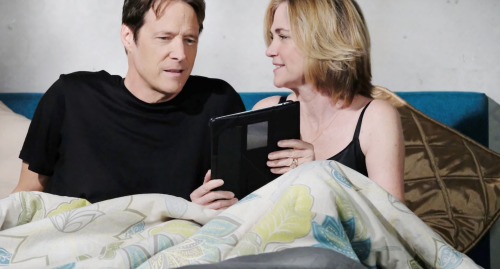 Speaking of shady agendas, Jack Deveraux (Matthew Ashford) will have one as the mayoral debate kicks off. He’ll score something he thinks will make Abe Carver (James Reynolds) look bad, and it may involve what appears to be an affair with Sheila Watkins (Tionne “T-Boz” Watkins). Things probably won’t be quite as they seem, but that won’t stop a special guest from flipping out.

Valerie Grant (Vanessa Williams) will surprise Abe by attending this event, but Days of Our Lives spoilers hint that she’ll be the person who ends up most shocked. If Jack has evidence of a hot moment, Valerie’s sure to ditch this whole long-distance thing permanently.

Finally, Nicole will rip into Chloe for letting her daughter get abducted. A search will get underway, but they’ll both be terrified and determined to bring Holly home. We’ll give you updates as other Days news comes in. Stay tuned to DOOL and don’t forget to check CDL often for the latest Days of Our Lives spoilers, updates and news.