BY hellodrdavis on April 20, 2019 | Comments: one comment
Related : Days of Our Lives, Soap Opera, Spoiler, Television 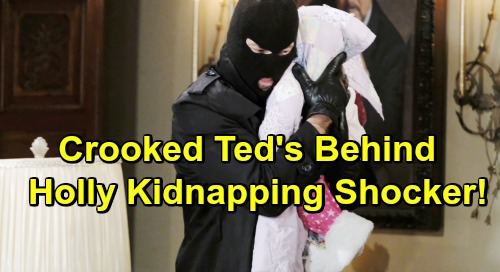 Days of Our Lives (DOOL) spoilers tease that Holly Jonas (Harlow and Scarlett Mallory) is in for a scary episode. This little girl has been through a lot in the past six months. She’s lost her mother Nicole Walker (Arianne Zucker), who is presumed dead, and she’s got a new living arrangement with Chloe Lane (Nadia Bjorlin) at the DiMera mansion. And now, she’s going to experience a terrifying abduction.

According to the Days of Our Lives weekly preview, Holly will be kidnapped and carried out of the DiMera mansion by a man wearing a mask. Holly will surely be terrified by the ordeal, as will Chloe when she learns about the kidnapping. Of course, the big question now is who took Holly and why.

At this point, it looks like the main suspect will be the drug cartel who is after Chloe for killing its leader, El Fideo (Andoni Gracia). The cartel has tried on more than one occasion to kill Chloe and failed, so it seems that they are now going after Holly in order to terrorize Chloe.

And according to Days of Our Lives spoilers, there will be a familiar face involved in the kidnapping…Ted Laurent (Gilles Marini). Ted was recently shown on the phone with a mystery person discussing both Chloe and Hope, and DOOL spoilers state that Ted will be involved in Holly’s abduction. So, it’s looking like Ted is involved with the cartel, and that he will give them intel that will help them abduct Holly.

Of course, this is alarming since Ted is Salem’s interim DA. He works closely with the Salem PD and is privy to what the police know about various investigations. And he’s pursuing a personal relationship with police commissioner Hope Hernandez (Kristian Alfonso), so he’s especially close to her. He’s got her trust, and that makes him very dangerous.

DOOL spoilers say that Hope and Rafe Hernandez (Galen Gering) will work together on the case of Holly’s kidnapping, and of course that means that Ted will know everything about their leads and about the information they uncover throughout the course of their investigation. He’ll be able to feed that information to the cartel and directly to the person holding Holly, which will impede the investigation.

Of course, all this will be happening while Hope’s marriage to Rafe is crumbling, and Hope is getting closer to Ted. Hope has told Ted to back off in the past, but Days of Our Lives spoilers say that she’ll again open up to him about something. It could be regarding the investigation into Holly’s disappearance.

It’s likely the case that Ted has been cozying up to Hope because of his involvement with the cartel. In fact, he could have been acting on direct orders of the cartel all along, to infiltrate the Salem PD and get close to the police commissioner so that the cartel can work around the police.

Of course, once everything about Ted’s involvement with the cartel and Holly’s kidnapping is eventually revealed, Hope is going to realize that she was totally duped by Ted, but by then it may be too late for her marriage to Rafe to survive. And it could be too late to save her job as police commissioner.

It’s certainly looking like Ted stands to ruin Hope’s personal and professional life. Do you think she’ll lose everything when the truth comes out? Stay tuned to DOOL and don’t forget to check CDL often for the latest Days of Our Lives spoilers, updates, and news.