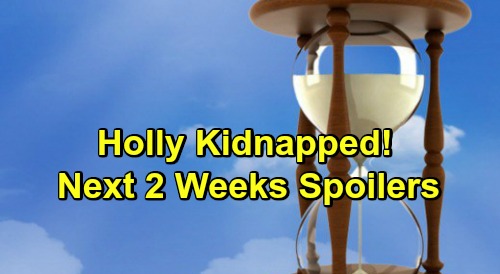 Days of Our Lives (DOOL) spoilers for the next two weeks tease that some hot storylines will bring major drama. During the week of April 15-19, Will Horton (Chandler Massey) will prepare to have a biopsy done on his newly discovered brain tumor. While he’s in the hospital, Will suffer through a terrible seizure. It’ll leave Sonny Kiriakis (Freddie Smith) freaking out as Dr. Rex Brady (Kyle Lowder) steps up to handle this.

Thankfully, Will’s going to be OK. He’ll get the biopsy as planned, so Dr. Marlena Evans (Deidre Hall) will anxiously await the results along with Sonny. Days of Our Lives spoilers say they’ll worry about what the future holds for Will, but they’ll give him plenty of support. That’s all they can do at this point.

Over with Rafe Hernandez (Galen Gering), he’ll be called to the DiMera mansion. DOOL fans can expect a hostage situation that includes Ciara Brady (Victoria Konefal) and Gabi Hernandez (Camila Banus). After a drug cartel member makes his escape with Ciara, Ben Weston (Robert Scott Wilson) and Hope Hernandez (Kristian Alfonso) will leap into action. They’ll do whatever they can to find Ciara ASAP.

As for Gabi, she’ll get a gun aimed at her and fear the worst. Stefan DiMera (Brandon Barash) will also face a threat to his life, but Rafe will be the one who faces the bullet. He’ll get shot and lose consciousness when he hits his head on a table, so Gabi will be a mess next to her bleeding brother. She’ll get down on the floor and beg Rafe to pull through this.

Thankfully, Days spoilers state that Rafe will indeed make a full recovery. After he’s hospitalized, Eli Grant (Lamon Archery) will show up with some surprising updates. Eli will mention a conversation he overheard between Ted Laurent (Gilles Marini) and someone on the phone. He’ll think it was bizarre since Hope and Chloe Lane’s (Nadia Bjorlin) names came up.

During the week of April 22-26, Kate Roberts (Lauren Koslow) will catch Ted as well. She’ll eavesdrop as he chats about Chloe again, so something is definitely off here. Perhaps Ted has had ulterior motives all along. Back with Stefan, he’ll struggle to hide a Gabi-related incident. It looks like they’ll either hook up or come close to it since Chloe will find a stray button of Gabi’s later.

After the hostage chaos calms down and Ciara’s safe, she’ll get her sex session with Ben back on track. They’ll move past an earlier interruption and finally make love. Next, Days spoilers say Sarah Horton (Linsey Godfrey) will get sneaky. She’ll pull some sort of trick that forces Marlena to confess Eric Brady’s (Greg Vaughan) feelings for Sarah.

When Sarah confronts him later, Eric will admit he indeed feels more than just friendship for her. Of course, Nicole Walker (Arianne Zucker) will blow into town around the same time, which will definitely complicate matters. Holly Jonas (Harper and Scarlow Mallory) will be kidnapped by someone mysterious. Will that be Nicole herself or will a twist keep her from her daughter a little longer?