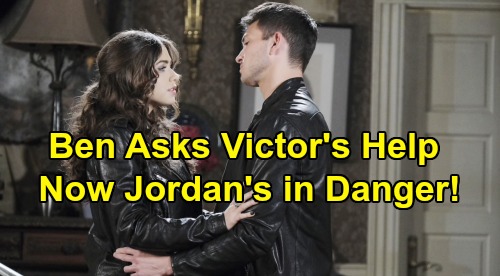 Days of Our Lives (DOOL) spoilers tease that Ben Weston (Robert Scott Wilson) will be feeling very unsettled. As DOOL viewers know, his sister Jordan Ridgeway (Chrishell Hartley) is back in Salem after being released from Bayview. She’s now reunited with her infant son David Ridgeway and living with Rafe Hernandez (Galen Gering)…and she doesn’t want Ben anywhere near her or her son. She still considers Ben to be dangerous.

Well, that’s got Ben ruffled, and it’s also got him worried about Ciara Brady’s (Victoria Konefal) personal safety. DOOL viewers will remember that the reason Jordan went to Bayview in the first place was that she kidnapped and tried to kill Ciara, and the reason she did those things was because she thought she was somehow “saving” Ciara from Ben. Ben’s afraid that Jordan’s not fully recovered, and that she might still pose a threat to Ciara.

Of course, it didn’t help that Jordan has made veiled statements to Ben about fearing that something bad could still happen to Ciara. And soon, something will happen that will convince both Ben and Ciara that Jordan’s still out to harm Ciara. According to Days of Our Lives spoilers, Ciara will nearly be hit by a car that will seem to be targeting her directly. The experience will leave both Ben and Ciara rattled, and Ben will decide that he’s got to take drastic action to protect his love.

But the action he takes will be a bit shocking. He’ll go to Ciara’s grandfather, Victor Kiriakis (John Aniston) for help. Ben knows better than anyone how protective Victor is of his granddaughter – after all, Victor recently nearly killed Ben by strangling him with a necktie, all under the guise of protecting Ciara. Of course, Ben wasn’t amused by Victor’s actions, but one thing he learned from the experience was how far Victor would go for Ciara.

So it seems that Ben will pay Victor a visit and ask for his help in keeping Ciara safe. He’ll explain the situation with Jordan being released and the incident with the car and hope that the Titan mogul will agree to help him. Chances are, Victor will listen, since Ciara’s safety is at stake, but he may balk at the idea of working with Ben to ensure Ciara’s safety. We’ll see if Ben can talk Victor into them working together for a common goal.

Of course, when Victor gets involved in situations like these, drastic actions tend to occur, so Ben might not like the way that Victor wants to deal with the problem. He might want to “take care of” Jordan permanently, which Ben would certainly object to. If the two are going to work together to protect Ciara from Jordan, they’ll have to agree on a course of action, which could be difficult.

We’ll see what happens with Jordan and Ciara going forward – perhaps Ciara will get a bodyguard, which is something she may or may not appreciate. How do you think Ben and Victor will try to protect Ciara from Jordan? Stay tuned to DOOL and don’t forget to check CDL often for the latest Days of Our Lives spoilers, updates, and news.