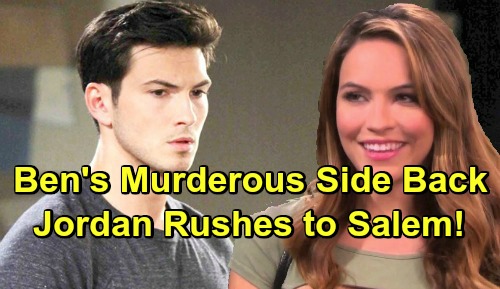 Days of Our Lives (DOOL) spoilers tease that Ben Weston (Robert Scott Wilson) will try to be patient. Hope Hernandez (Kristian Alfonso) took great pleasure in telling Ben where Ciara Brady (Victoria Konefal) dashed off to. She pointed out that after Ben broke Ciara’s heart with betrayals, her daughter went to be with her ex, Theo Carver (Kyler Pettis), in South Africa.

Although Hope gleefully rubbed it in, Ben will realize he has to wait it out and count on his own charm. He won Ciara over once before and he’ll hope he can do it again. Ben just has to get Ciara back to Salem first. Days spoilers say Ben will give Ciara a chance to return on her own, but the distance and time apart will take a toll. He’ll feel like he’s going crazy without her – and he just might be!

Ben’s medication obviously helps manage his killer instincts and his overall wild side. There’s usually only trouble when Ben starts skipping doses. Whether that happens or not, Days of Our Lives spoilers say trouble’s looming. DOOL fans can definitely expect some dark moments for Ben.

During the week of January 28-February 1, Ben will reach out to Ciara. When he can’t get in touch with her, Ben will start to come unhinged. He’ll be on a downward spiral, so there’s no predicting how low he’ll sink. Ben is a good guy at heart, but he does bad things when he’s unwell. Ciara has been a stable influence in his life, but without her? Ben could really go off!

Of course, it’s doubtful Days of Our Lives will unleash Ben’s inner beast and let him go murder someone. Ben isn’t going anywhere, so the show doesn’t want to give him a lengthy prison sentence or force him back in Bayview. Nevertheless, Ben could find himself in desperate need of saving again. Ciara may be the only one who can get through to him, but she’ll be nowhere to be found.

Ben’s ordeal could be part of the reason his sister, Jordan Ridgeway (Chrishell Hartley), comes back to town. If Ciara finally gets updates on Ben’s disturbing spin-out, she may return home and seek backup. Ben hasn’t seen Jordan in a while, so it’d be nice for them to have a little family reunion.

Both Ben and Jordan went through some nightmares thanks to Clyde Weston (James Read), so that alone is enough to bond them for life. Maybe Jordan can help Ciara get a grip on Ben again. Regardless, Ciara may soften once she sees how much Ben needs her. Hope will continue to think this romance is twisted and unhealthy, but Ciara and Ben’s hearts will tell them otherwise.