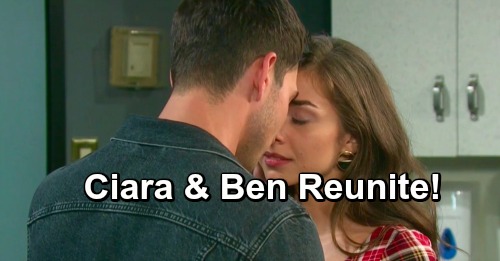 Days of Our Lives (DOOL) spoilers tease that Ben Weston (Robert Scott Wilson) and Ciara Brady (Victoria Konefal) will remain miserable. They want nothing more than to be together, but Ben insists that just isn’t possible. The risk to Ciara’s life is simply too high.

It terrified Ben to think he might’ve killed his own sister. Ben probably would’ve killed Jordan Ridgeway (Chrishell Hartley) without Rafe Hernandez’s (Galen Gering) intervention. He’s worried that he might come unhinged at some point and turn on Ciara. To eliminate that possibility, Ben broke up with Ciara and intends to keep his distance.

Of course, that’ll be rough on both of them. Days of Our Lives spoilers say these broken hearts will pine for each other. Ben and Ciara will need some guidance as they work through their sorrow. It’s not like Ben has many friends in town, so Days fans can likely guess where he’ll turn.

Stefan DiMera (Tyler Christopher) will end up advising Ben as his employee and almost buddy. Since Stefan will be growing closer to Chloe Lane (Nadia Bjorlin), he’ll feel hopeful about love. Stefan wasn’t sure he’d find it again after “Gabby,” Abigail Deveraux’s (Kate Mansi) alter. She was certainly a strange obsession, but Stefan convinced himself he was head over heels for “Gabby.”

Now Stefan’s falling for a real person, which is progress. He’ll let Ben know that it’s important to fight for love. Stefan may suggest that there’s someone else out there for Ben. However, Ciara’s the one who’s truly touched his soul. He can’t imagine anyone else doing that, so he might shut down the idea of love for now.

On the other hand, Stefan might push Ben to give things another shot with Ciara. Chloe is the only person who sees the good in Stefan, so he can relate to Ben’s situation. Perhaps Stefan will be rooting for Ben and Ciara to make it work.

Other Days of Our Lives spoilers say Ciara will seek advice from Julie Williams (Susan Seaforth Hayes). Julie will understand Ciara’s pain, but she may think Ben’s doing the right thing by backing off. She certainly wont want Ciara in any danger. Ben’s showing great love by protecting Ciara from any harm that would come to her, but she just doesn’t see him as a threat.

What’s it going to take to get Ben and Ciara back together? Since nearly killing Jordan pushed them apart, Ben needs a chance to prove to himself that he’s in control. Maybe there’ll be some incident down the road that results in Ben having a chance to kill someone. If he can control his emotions and stop a deadly DOOL disaster, Ben might see the same firm changes that Ciara sees.