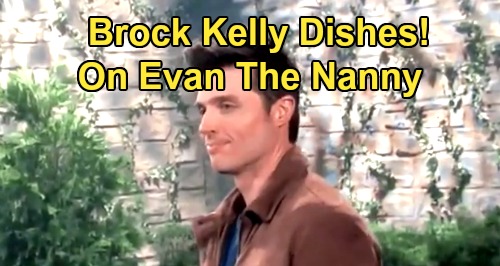 Days of Our Lives (DOOL) spoilers tease that Sonny Kiriakis (Freddie Smith) will soon have a new confidante. As DOOL viewers know, his husband Will Horton (Chandler Massey) is currently sitting in prison for causing the death of his mother Adrienne Kiriakis (Judi Evans). That leaves Sonny in need of companionship, and he recently connected with Evan Frears (Brock Kelly), who’s Rafe Hernandez’s (Galen Gering) nanny.

Well, it looks like there could soon be an attraction blossoming between Sonny and Evan. As DOOL viewers know, Evan recently invited Sonny to dinner, but it didn’t seem like Sonny really caught on that Evan seemed to be interested in him. But as Sonny continues to grow apart from Will, which seems inevitable, the two will likely grow closer.

Recently, Brock Kelly appeared as a guest on “The Freddie & Alyssa Show” podcast on YouTube. If you haven’t checked out the podcast, it’s a great source to learn more about Freddie Smith, who portrays Sonny Kiriakis on DOOL, and his take on things. He and his wife Alyssa frequently have guests on the podcast, and they recently hosted Brock, who dished about his experiences thus far at Days of Our Lives.

Interestingly, Brock is not new to DOOL. Back in 2005-2006, he portrayed a character named Josh for eleven episodes. But his role as Evan Frears is a completely different character, and it turns out that when Brock auditioned for the role, the character was referred to as “Mannie the mannie,” which Freddie and Brock recalled during the podcast.

Brock also spoke about his DOOL audition. He stated that, at the time of his audition, he was working in financial services in a building just down the street from the audition site. “I sat in room with a bunch of guys, waited my turn, went in there, knew all my lines, just had fun with it…humbly speaking,” he joked.

Brock also relayed how he was then called back in to run another scene, and that afterwards executive producer Albert Alarr jumped up out of his chair and hugged him, and that after that, Brock had a good feeling that he’d get the part.

About his experiences so far at DOOL, Brock has this to say: “Everybody was so welcoming and in terms of the cast, the crew, everybody in hair and makeup…they made it feel very warm, made it a good environment to step into.”

And Brock also had high praise for the writing team as well. “It’s so fun,” he said. “I’s so clever what they can do for so long. They’re able to keep people’s attention for 54 years…the writing is so clever, too.” He noted that while soaps sometimes get a bad name, it’s truly remarkable how the writers are able to sustain storylines at such a great volume.

Viewers will certainly see more of Evan the nanny as time goes by, and we’ll see how his relationship with Sonny unfolds over time. Are you enjoying the character of Evan so far? Stay tuned to DOOL and don’t forget to check CDL often for the latest Days of Our Lives spoilers, updates, and news.