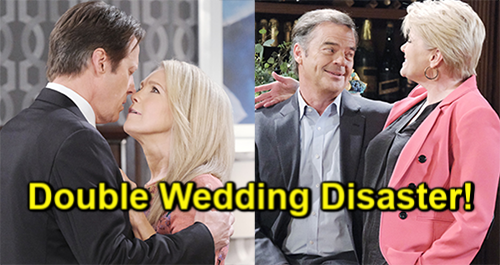 Days of Our Lives (DOOL) spoilers tease that Jack Deveraux (Matthew Ashford) and Justin Kiriakis (Wally Kurth) will be eager to wed. After years apart and a terrible amnesia personality change, Jack is finally back to his old self.

His relationship with Jennifer Horton (Melissa Reeves) is stronger than ever, so they’re ready to take the next step. The same goes for Justin, who’s ready to make things official with Adrienne Kiriakis (Judi Evans) again.

On November 1, Jack will head to the courthouse and pick up a marriage license. He’ll hope to remarry Jennifer as soon as possible, but they might as well let the other happy couple join in. During the week of November 4-8, Justin will also get a marriage license. It won’t be long until both couples are all set, so it looks like they’ll make this a double wedding.

Princess Gina And Eve Donovan Will Cause Mayhem And Disaster

Unfortunately, this joint wedding day will turn into a total disaster. Days of Our Lives spoilers say Eve Donovan (Kassie DePaiva) will try to make some last-minute mischief. She’ll want to derail Jack and Jennifer’s bliss, but they’ll do their best to thwart the threat. Too bad there’s another threat waiting to upend the nuptials!

Days of Our Lives spoilers say Jennifer will make a stunning discovery. She may realize Dr. Wilhelm Rolf (William Utay) turned Hope Brady (Kristian Alfonso) into Princess Gina. Jennifer will take a horrific tumble later – presumably after being shoved off some ledge. It’ll land Jennifer in a coma and leave Princess Gina scrambling to make sure Jenn never awakens.

Will Jack and Jennifer tie the knot before all this goes down? What about Justin and Adrienne? There’s no word yet on if these couples will actually say “I do,” but neither one is set to be happy for long.

The time jump on November 8 will bring some terrible tragedies. Beyond Jennifer’s coma, there’s still DOOL buzz about Adrienne potentially being dead after this leap into the future.

Days spoilers say this double wedding will start off as the calm before the storm, but that storm will blow in sooner than any of them expect! Jennifer, Jack, Justin and Adrienne are all headed for trouble, so don’t miss what’s in store.