BY hellodrdavis on June 16, 2019 | Comments: one comment
Related : Days of Our Lives, Soap Opera, Spoiler, Television 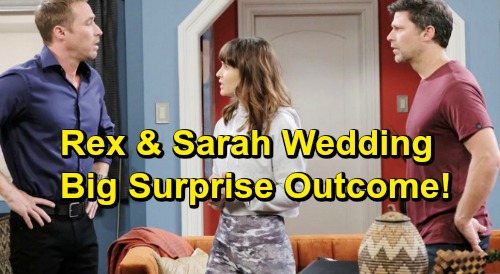 Days of Our Lives (DOOL) spoilers tease that things will soon go from bad to worse for Eric Brady (Greg Vaughan). He’s really been struggling lately with everything that’s been going on with Nicole Walker (Arianne Zucker). As DOOL viewers know, Nicole – who is actually Kristen DiMera (Stacy Haiduk) in disguise – totally rejected him after Holly Jonas’ (Harlow and Scarlett Mallory) “death.”

That left Eric distraught and completely vulnerable. Nicole is the love of Eric’s life, and for her to reject and blame him for Holly’s death is intolerable for Eric. But his situation is even more complicated than that, especially since before “Nicole” returned, he had fallen in love with Sarah Horton (Linsey Godfrey).

Eric certainly hasn’t forgotten about his feelings for Sarah, even though he knows that he can’t ever act on those feelings. Since Sarah is engaged to his brother Rex Brady (Kyle Lowder), it’s a place that Eric’s just not willing to go, especially given his history of falling for Nicole when she was in a relationship with his other brother Brady Black (Eric Martsolf).

It’s all pretty complicated, and to make matters even more difficult, Sarah has decided that she wants to deal with the situation by going full-steam ahead in her relationship with Rex. Recently, she told Rex that she wanted to get married asap, which thrilled Rex. They’ve been making plans for their wedding, but soon Rex will make a move that will cause some uncomfortable feelings for Sarah and Eric.

Meaning well, Rex will approach his brother with a very important question. According to DOOL spoilers, Rex will ask Eric to officiate at his wedding to Sarah. DOOL viewers will remember that Eric used to be a priest, so he can perform wedding ceremonies. And under different conditions, he’d probably be happy to conduct his brother’s wedding.

But given that Eric has feelings for Sarah, Rex’s request is going to put him in quite a spot. Just because “Nicole” has returned doesn’t mean that Eric’s feelings for Sarah have suddenly gone away, and actually being the person to marry her to someone else will be tough for him.

Chances are, Eric will need to have a heart-to-heart with mom Marlena Evans (Deidre Hall) before he makes a decision. And while Marlena will likely encourage him to get his feelings for his brother’s wife out in the open, DOOL spoilers say that Eric will bite the bullet and agree to officiate at the wedding.

One wonders whether Rex and Sarah’s wedding will ever happen, and DOOL viewers will have to wait to see whether they actually make it to the altar. We should note that Kyle Lowder, who portrays Rex, is slated to exit the show this summer, so it looks doubtful that the wedding will ever happen, and it’s always possible that Eric will finally admit his feelings to his brother.

Do you think that Eric and Sarah will ever get their feelings for each other out in the open and known to Rex? Stay tuned to DOOL and don’t forget to check CDL often for the latest Days of Our Lives spoilers, updates, and news.