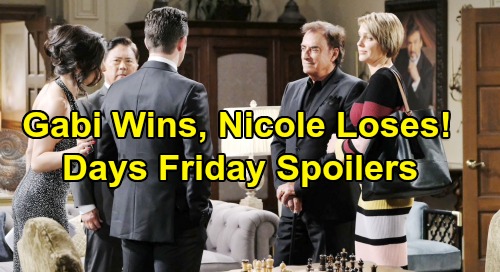 Days of Our Lives (DOOL) spoilers for Friday, August 2, tease that it’ll be confession time for Sarah Horton (Linsey Godfrey). Due to a mixture of exhaustion and pent-up feelings, Sarah called Rex Brady (Kyle Lowder) by the name “Eric” when she reciprocated his love declaration. Rex was stunned by the slipup, but his shock will turn to rage on Friday.

Sarah will do her best to explain, but Rex will think it’s obvious Eric Brady (Greg Vaughan) is the one she wants. Days of Our Lives spoilers say Sarah will eventually confess how she truly feels. Although Sarah cares about Rex and thought she could make this marriage work, she’s just not in love with him anymore. Sarah will try to let Rex down gently, but she’ll also be clear about Eric owning her heart.

Rex will lash out at Sarah for marrying him when she didn’t even mean her vows. He made plenty of mistakes that led up to Sarah’s feelings for Eric, but he’ll likely focus on her own mistakes in this moment.

Meanwhile, Hope Brady (Kristian Alfonso) will turn Ted Laurent’s (Gilles Marini) question around on him. Hope snooped until his apartment until she found wads of cash, so Ted pushed for an explanation when he returned.

Of course, Hope will suggest she’d rather hear Ted’s explanation instead. Days spoilers say they’ll bicker over Ted’s secrets, so DOOL fans can expect some tense scenes. Across town, Salem’s newest DiMeras will learn the outcome of their battle. Gabi DiMera (Camila Banus) and “Nicole DiMera” will make some convincing pitches as they work to get Mr. Shin’s (Michael Hagiwara) support.

This will be music to Gabi’s ears since she’s still plotting Stefan DiMera’s (Brandon Barash) takedown. He’s in for a rough time in the week ahead, August 5 to August 9, but guilt will be a big problem for Gabi soon. Kristen DiMera (Stacy Haiduk) will have to lick her wounds and focus on her next desperate strategy.