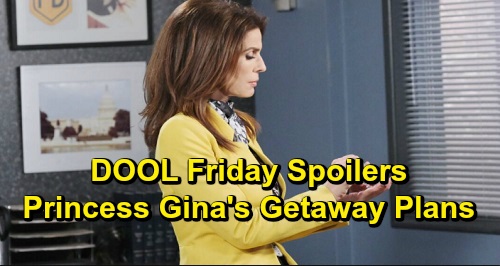 Days of Our Lives (DOOL) spoilers for Friday, December 13, tease that love will be in the air for one recently reunited couple. DOOL fans know Jennifer Deveraux (Melissa Reeves) was stuck in a coma for a year, but Jack Deveraux (Matthew Ashford) always kept hope alive. Now that Jennifer’s awake and has spent some time recovering in the hospital, she’s ready to go home and get her life back on track.

Jack will happily take Jennifer back to the Horton house in Friday’s episode. He’ll even carry her over the threshold since he didn’t get to do that after their latest wedding. Days spoilers say Jack and Jenn will enjoy some romantic moments as they celebrate how they feel about each other. They’ll try to put Jennifer’s case out of their minds and focus on all they have to be grateful for.

Abigail DiMera (Kate Mansi), on the other hand, won’t be able to stop dwelling on her suspicions. She can tell something’s off about Jennifer’s case and she’s determined to find out what it is. Luckily, Chad DiMera (Billy Flynn) offered a way to help.

DiMera Enterprises owns a company that’s developed a sophisticated artificial intelligence program. Once they get back to Chad, he should be able to tell Abigail if the surveillance footage was altered. Of course, DOOL viewers know that it was! Princess Gina Von Amberg aka Hope Brady (Kristian Alfonso) is actually responsible for shoving Jennifer, not Eve Donovan (Kassie DePaiva).

Over with Xander Kiriakis (Paul Telfer), he’ll have a lot to think about after Sarah Horton’s (Linsey Godfrey) announcement. Sarah just told Xander that she’s leaving town with Eric Brady (Greg Vaughan) and they’re taking their daughter with them. Of course, this is just a temporary exit. Sarah and Eric will take Mackenzie “Mickey” Horton to Boston for treatment, so Xander and Nicole Walker (Arianne Zucker) should react to that news on Friday.

Other Days of Our Lives spoilers say Ciara Brady (Victoria Konefal) will get a warning. Ben Weston (Robert Scott Wilson) will push Ciara to be careful when it comes to Xander. Since Ben’s mind has been wandering to some dark places, his concerns about Ciara’s safety will definitely rev up.

Ciara will indeed manage to raise red flags for Xander soon enough. She’ll have to be sneakier if she hopes to prove Ben’s innocence and keep herself safe in the process! We’ll give you updates as other Days details emerge. Stay tuned to DOOL and don’t forget to check CDL often for the latest Days of Our Lives spoilers, updates and news.