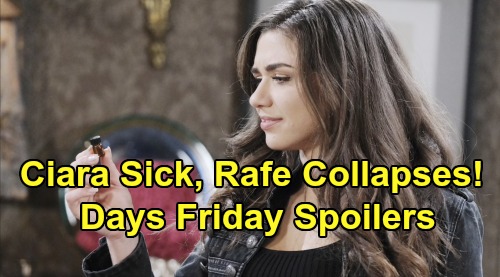 Days of Our Lives (DOOL) spoilers for Friday, October 25, tease that Lani Price (Sal Stowers) will express confusion. Gabi DiMera (Camila Banus) just invited herself to Lani and Eli Grant’s (Lamon Archey) wedding with a goal in mind. She wants to see the look on everyone’s face when Lani dumps Eli at the altar, so Lani obviously doesn’t understand.

On Friday, Lani will point out that she loves Eli and has no intention of ditching him. She’ll wonder why Gabi thinks she would do such a thing. That’s when Gabi will drop the ultimate bomb. She’ll reveal that Julie Williams’ (Susan Seaforth Hayes) new pacemaker is rigged with a booby trap. If Lani refuses to follow orders, Gabi will blow up Julie’s heart and leave her family devastated.

Over with Eli and Julie, they’ll have a sweet conversation and prepare for the future. Eli will feel like the worst of Julie’s crisis is over. He’ll be glad his grandma survived and will have more years to bond with him. Julie will feel the same way, and she’ll let Eli know how happy he is about his impending marriage to Lani. Unfortunately, they’ll have no idea Gabi’s threatening to derail the whole celebration.

Meanwhile, Jordan Ridgeway (Chrishell Hartley) will await the results of her evil plan. She just offered up some cupcakes at David Ridgeway’s (Jaxton and Dexter Ellis) birthday party, but DOOL fans know a dangerous one is meant for Ciara Brady (Victoria Konefal). Days of Our Lives spoilers say Ciara will scarf down her treat and quickly begin feeling ill. She’ll head home with Ben Weston (Robert Scott Wilson) and most likely leave Jordan with a satisfied smirk.

However, it looks like this is a soapy fake-out. Jordan will think she’s pulled off her plot, but Rafe Hernandez’s (Galen Gering) collapse should let her know it went horribly wrong. Days spoilers state that Rafe will suddenly keel over, which will leave Jordan in shock by the time Monday rolls around. Perhaps that labeling system of hers wasn’t as foolproof as she thought!

Other Days of Our Lives spoilers say Dr. Wilhelm Rolf (William Utay) will have a gift for Hope Brady (Kristian Alfonso). He’ll give Hope a tiara, which will trigger the final phase of her transformation. Hope will fully become Princess Gina in her mind. Every trace of Hope will be gone, so that’ll lead to some crazy situations in the coming weeks.

It sounds like some hot drama’s coming up in Salem. We’ll give you updates as other Days news emerges. Stay tuned to DOOL and don’t forget to check CDL often for the latest Days of Our Lives spoilers, updates and news.