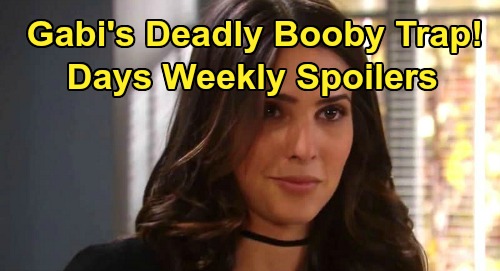 Days of Our Lives (DOOL) spoilers for the week of October 28-November 1 tease that some Salem shockers are in store. First, let’s talk about Hope Brady’s (Kristian Alfonso) suspicious behavior. Thanks to Dr. Wilhelm Rolf’s (William Utay) scheme, Hope’s becoming Princess Gina. The complete transformation will bring even more mayhem in the week ahead.

Haley Chen (Thia Megia) will tip John Black (Drake Hogestyn) and Marlena Evans (Deidre Hall) to trouble soon. She’ll fill them in on that weird encounter she had with a smoking Hope, so “Jarlena” will immediately smell trouble. Hope isn’t a smoker, so they won’t understand why she’s suddenly picked up the habit.

Days of Our Lives spoilers say there’ll be more concerns as time goes on. Xander Cook (Paul Telfer) will even think Hope’s acting peculiar. She won’t seem to have any recollection of who Xander is, so he’ll definitely feel like something’s wrong. However, Xander may choose to brush off the incident and stay out of it. He’s got bigger problems due to Sarah Horton (Linsey Godfrey) and all the baby drama!

Meanwhile, Ciara Brady (Victoria Konefal) will find some incriminating proof. She’ll stumble across a clue in Ben Weston’s (Robert Scott Wilson) coat pocket, which could leave her questioning the changes she constantly defends. Ciara might start to wonder if Ben’s truly as changed as she thinks.

As for Jordan Ridgeway (Chrishell Hartley), she’ll run amok and ultimately attack JJ Deveraux (Casey Moss). It sounds like JJ will simply end up in the wrong place at the wrong time. Jordan’s made it clear that she’ll take out anyone who gets in her way. JJ will likely pay the price for discovering Jordan’s new plan and trying to stop her.

On DOOL’s Halloween episode, Claire Brady (Olivia Rose Keegan) will break out of Bayview with Jordan’s help. Ben will also surrender to his dark impulses while Tony DiMera (Thaao Penghlis) delivers stunning news to Marlena. It’s possible all that will be a fantasy for the spooky holiday though, so keep that in mind.

Later, Gabi DiMera (Camila Banus) will show Lani Price (Sal Stowers) who’s boss. Due to a booby trap in Julie Williams (Susan Seaforth Hayes) pacemaker, Gabi will have the power to kill her at any moment. She’ll prove it to Lani, which could mean she’ll mess with it just enough to give Julie’s loved ones a scare.

Of course, Lani will hate the idea of caving to Gabi’s demands. Days spoilers say Gabi will be adamant about Eli Grant (Lamon Archey) getting dumped at the altar. Despite Lani’s attempts to compromise, it seems she’ll have to obey orders – at least if she wants to keep Julie alive! Lani’s wedding day will be terrifying as she marches down the aisle to doom.

To make matters worse, Lani’s mother will come all the way to Salem for this. Marilyn McCoo will reprise her role as Tamara Price just in time for the disaster. Days of Our Lives spoilers say some hot drama’s brewing, so don’t miss all the action. We’ll give you updates as other Days details emerge. Stay tuned to DOOL and don’t forget to check CDL often for the latest Days of Our Lives spoilers, updates and news.