Days of Our Lives Spoilers: Plot To Save Stefan’s Life – Gabi Tricked Into Believing Husband’s Dead?

BY hellodrdavis on October 17, 2019 | Comments: one comment
Related : Days of Our Lives, Soap Opera, Spoiler, Television 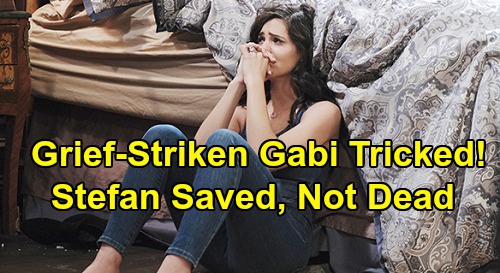 Days of Our Lives (DOOL) spoilers tease that Gabi DiMera (Camila Banus) has had a terrible time lately. She was happily in love with Stefan DiMera (Brandon Barash) and planning a wonderful life with him, when things were cut tragically short. She received word that Stefan had been shot while trying to save his mother, Vivian Alamain (Robin Strasser), and she soon learned that he was brain dead and beyond saving with traditional medical methods.

But one thing struck us as particularly strange, and it had to do with Dr. Wilhelm Rolf (William Utay). At one point, Gabi brought in Rolf and begged him to save Stefan with his serum, but Rolf refused, saying that for the serum to work on a person, that the person must still have a “spark of life” left in him or her. And after a cursory examination, Rolf deemed that Stefan didn’t have that spark.

But this seems highly suspect. After all, DOOL viewers have seen Rolf bring back people from the dead who were deemed clinically dead. In fact, we can remember when Vivian was brought back from the dead (when she was being played by Louise Sorel), and she had been declared dead after being shot in the chest. There wasn’t a “spark of life” there by any means.

Dr. Rolf Told Gabi DiMera A Tall Tale – Did He Save Stefan DiMera?

So, was Rolf just telling Gabi a tall tale when he claimed that he couldn’t save Stefan? We think it’s entirely possible, and that something might have happened behind the scenes to save Stefan’s life – something that even the medical staff may not know about.

Sure, it would be pretty convoluted, given that Stefan’s heart supposedly got transplanted into Julie Williams’ (Susan Seaforth Hayes) body, but after all, Rolf seems to be able to do just about anything.

As CDL previously theorized, it’s possible that Stefan could have been somehow saved and revived by Rolf’s serum, while a big switch was made, and someone else’s heart was donated to Julie. DOOL viewers will remember that Dr. Henry Shah (Piter Marick) recently died on the show, and it’s possible that Rolf could have saved him with the serum and harvested his heart for Julie, while leading everyone to think it was Stefan’s heart.

Is Dr. Rolf Working Behind The Scenes With Vivian Alamain?

After all, if Stefan is to return someday – and we think there’s a pretty good chance that he will – then there would need to be some sort of explanation for why everyone thought Julie got his heart. It also means there would need to be some reason why Rolf would want to save Stefan and keep this fact from Gabi. It’s always possible that Rolf is working with someone like Vivian behind the scenes to get Stefan away from Gabi – you just never know.

At any rate, there are a lot of DOOL viewers who would love to see Stefan return down the line and a lot of online chatter about when and if Brandon Barash will return in the role. If TPTB do bring Stefan back at some point in the future, there will need to be an explanation for how and why Gabi was duped into believing that Stefan was unable to be revived. But what will that explanation be?

What do you think? Did Stefan get secretly revived behind the scenes? Stay tuned to DOOL and don’t forget to check CDL often for the latest Days of Our Lives spoilers, updates, and news.