BY hellodrdavis on June 23, 2019 | Comments: one comment
Related : Days of Our Lives, Soap Opera, Spoiler, Television 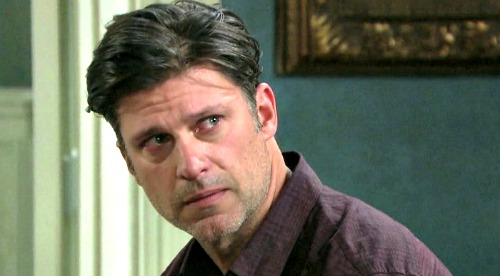 Days of Our Lives (DOOL) spoilers has some news to pass on about a popular DOOL star. Greg Vaughan, who portrays Eric Brady on the NBC soap, is facing a legal drama concerning the cursory of his three children with his ex-wife, Touriya Haoud.

As originally reported by Shownieuws, Touriya and Greg, who were married for eight years, are having a disagreement stemming from Greg’s desire to move to North Carolina with his new partner, actress Angie Harmon. Of course, if Greg moves from Los Angeles, then that would impact the custody of his three sons.

A comment from Touriya offers some insight into the nature of the dispute: “I would never rid my children of their father, because he is just a wonderful father and I am also a wonderful mother. I think we should both be in their lives.”

She continued: “Of course new partners are involved, but it shouldn’t be that you say, ‘Oh, now I want to live with my girlfriend and I want one hundred percent and you just come to visit a few times a year.’”

Touriya also said in the report that a judge hopes that the dispute will be resolved via mediation, but if that doesn’t settle the matter, then a lawsuit will be the next step.

This news of a possible move on the part of Greg Vaughan understandably may leave DOOL viewers wondering about what it all means for the future of Eric Brady on the show. So far, there has been no news or rumblings about Greg leaving the show, but one must wonder about the possibility if Greg is considering a move to North Carolina.

Of course, Eric is currently at the center of some major storylines on DOOL. He’s heartbroken over being dumped by Nicole Walker (Arianne Zucker), who is actually Kristen DiMera (Stacy Haiduk) in a Nicole mask. Plus, he’s hopelessly in love with Sarah Horton (Linsey Godfrey), who’s engaged to his brother Rex Brady (Kyle Lowder).

One wonders what would happen to Eric if his portrayer ends up moving across the country. But for now, it seems as though the custody dispute with his ex-wife is far from over, so that needs to be settled first.

We’ll keep you updated as news comes in about the custody dispute and any possible ramifications of Greg Vaughan’s possible move from Los Angeles. Stay tuned to DOOL and don’t forget to check CDL often for the latest Days of Our Lives spoilers, updates, and news.