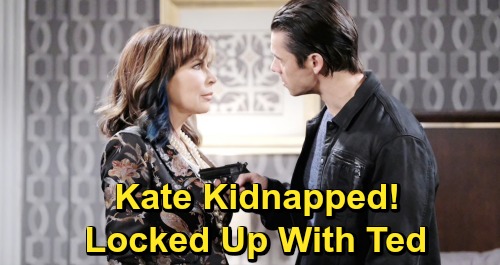 Days of Our Lives (DOOL) spoilers tease that Kate Roberts’ (Lauren Koslow) snooping will backfire. She can tell something strange is going on with “Nicole Walker” (Arianne Zucker), so she’s determined to get to the bottom of all this. Kate feels certain there’s a connection between “Nicole” and Xander Cook (Paul Telfer), but she needs more info to prove it.

That’s why Kate will dig around “Nicole’s” room and hope to score some evidence. She won’t know exactly what she’s looking for, but she’ll count on something to present itself. While Kate’s poking her nose where it doesn’t belong, “Nicole” will show back up and unleash her fury. She’ll grill Kate about why she’s there, but she’ll undoubtedly assume lack of trust is the answer.

Of course, “Nicole” won’t particularly care if Kate trusts her or not. She just won’t want Kate blowing the plan. Kristen DiMera (Stacy Haiduk) is juggling a lot at the moment, so the last thing she needs is Kate undoing all her hard work. Days of Our Lives spoilers say “Nicole” will try to downplay the drama, but Kate will get a clue soon after. She’ll have a horrifying realization as she overhears a chat.

DOOL fans can expect Kate to move into total freak-out territory. Since Xander will decide to let Ted Laurent (Gilles Marini) live, he may mention that Ted is still in captivity. Then again, Xander could pretend he killed Ted and hope Kristen takes his word for it. He’ll show off his softer side, but Kate just won’t see or feel anything but rage.

Ted definitely isn’t her favorite person, but Kate will worry about him anyway. This could be why Days of Our Lives spoilers say Kate will call 911! She’ll contact the cops over whatever Xander’s cooked up and hope this will be enough to finally put him away. Sadly, Xander will hope to halt that plan. It appears Xander will throw Kate in the same place as Ted and hold them both hostage.

Days spoilers say kidnapped Kate will stir up plenty of trouble. She’ll be in close quarters with Ted, which will lead to some hot moments. Ted and Kate were romantically involved once upon a time, so it’ll be easy for them to slip back into old habits.