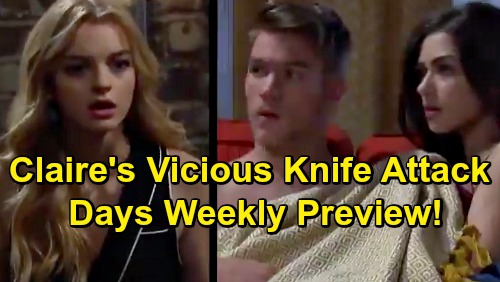 Days of Our Lives (DOOL) spoilers tease that Claire Brady (Olivia Rose Keegan) will totally lose it this week, and it will all be due to a disastrous plan put into motion by Ciara Brady (Victoria Konefal) and Tripp Dalton (Lucas Adams). The new DOOL promo for the week of June 24 is all about that plan and its possibly lethal consequences.

First off, the promo shows Ben Weston (Robert Scott Wilson) talking with Marlena Evans (Deidre Hall) at the Brady Pub. The good news is that Ben is out of police custody for setting the fire at the Horton cabin that Claire actually set. The bad news is that he’s filling Marlena in about Tripp and Ciara’s big plan for Claire, and it sounds pretty dangerous.

But first, Marlena’s going to have to get over the shock that her beloved Claire tried to kill three people by setting two buildings on fire. It looks like she’ll ultimately believe Ben when he outlines all the evidence that Claire was the fire starter. And then he’ll let Marlena know exactly what Tripp and Ciara are planning to do to get her to confess.

The plan is to make Claire insanely jealous, which they figure will lead her to become enraged and confess to her crimes, and then they’ll record the confession. Of course, Ben doesn’t like the plan because he’s worried that Claire’s jealousy will get out of control and she might lash out at Ciara…which he knows could be dangerous.

And Marlena won’t like the idea, either. But Ciara and Tripp will plunge forward with their scheme and the whole thing get wildly out of control when they decide that the best way to make Claire jealous is to let her find them in a compromising position. So, they’ll stage a scene where Claire walks in on them while they’re half-clothed under a blanket on the couch.

The promo shows Claire walking in, seeing the scene, and completely freaking out. She’ll be outraged that Ciara and Tripp are getting together, and even more outraged that they’re doing it in the loft right out in the open. But then things will take a terrible turn.

Claire is shown grabbing a knife from the counter and going after Tripp with it! The promo shows her yelling, then pinning Tripp down and holding him down with the knife at his throat while Ciara looks on, horrified. It certainly looks like a scary scene, especially for Tripp.

As DOOL viewers may know, Lucas Adams, who portrays Tripp, will be leaving the show this summer, so one wonders just how injured he might get as a result of Claire’s actions. We’ll have to tune in this week to see!

At any rate, it sure seems like Claire is really going to lose it this week. Are you looking forward to her unraveling? Stay tuned to DOOL and don’t forget to check CDL often for the latest Days of Our Lives spoilers, updates, and news.