BY hellodrdavis on February 12, 2019 | Comments: one comment
Related : Days of Our Lives, Soap Opera, Spoiler, Television 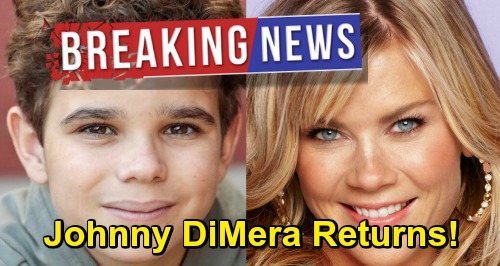 Days of Our Lives (DOOL) spoilers tease that a familiar face will be returning to Salem. Johnny DiMera (last portrayed by Griffin and Aaron Kunitz), who is the son of Sami DiMera (Alison Sweeney) and EJ Dimera (James Scott) and the grandson of Stefano Dimera (Joseph Mascolo), will be back on canvas later this year.

The role of Johnny was last portrayed by twins Griffin and Aaron Kunitz from 2009-2014, but will now be portrayed by just Griffin Kunitz. Griffin recently shared a photo of himself on Instagram on the Days set, smiling big and clearly happy to be back.

Johnny’s name has come up recently on Days, as Rafe Hernandez (Galen Gering) went to visit Johnny in Italy, much to the chagrin of Hope Hernandez (Kristian Alfonso). Johnny was having difficulty and acting out, and Rafe went to help out with him and work his special magic with Johnny, since the two have a special bond.

But according to Days buzz, Rafe’s visit may not succeed in squashing Johnny’s bad behavior. Word is that Johnny will return to Salem as a troubled young man who is keen on being the newest DiMera villain in town. Perhaps he’ll come back to drive a wedge between Rafe and Hope as Rafe struggles to reign Johnny in.

Or perhaps Johnny will find an evil ally in his Uncle Stefan DiMera (Tyler Christopher). He may desire to be mentored by Stefan, which would set up an interesting conflict between Stefan and Rafe, who will surely feel some sense of responsibility for Johnny.

Of course, we shouldn’t forget that Johnny is not only a DiMera, but he’s Sami’s son, too, which means he’ll probably be a handful. Are you looking forward to seeing Johnny back in Salem? Stay tuned to DOOL and don’t forget to check CDL often for the latest Days of Our Lives spoilers, updates, and news.