Days of Our Lives Spoilers: Hope Gets Her Heart Broken AGAIN – Should Bo Return and End Romantic Nightmares? 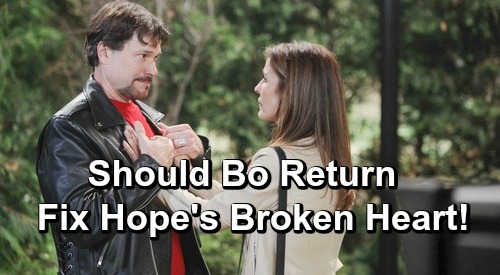 Days of Our Lives (DOOL) spoilers tease that Hope Brady (Kristian Alfonso) is headed for more heartbreak. She’s been awfully unlucky in love over the last few years. Aiden Jennings (Daniel Cosgrove) plotted to kill Hope at one point, so that relationship was obviously a disaster. Hope also had to endure the devastating loss of Bo Brady (Peter Reckell).

Once Hope finally moved on with Rafe Hernandez (Galen Gering), he betrayed her with Sami Brady (Alison Sweeney). They had technically broken up a few hours prior, but he still hid the truth and caused plenty of pain for Hope. Rafe and Hope tried to make their marriage work, but their efforts just weren’t enough.

Now we’ve got Ted Laurent (Gilles Marini), who would be a decent love interest for Hope if he weren’t so shady. Days of Our Lives spoilers say Hope and Ted will reconnect after she rescues him. Unfortunately, Ted will be keeping even more secrets by then. He’ll stay quiet after working out a deal with Kristen DiMera (Stacy Haiduk), which will just pile on the deception.

Of course, Ted already helped Xander Cook (Paul Telfer) fake Holly Jonas’ (Harlow and Scarlett Mallory) death. That was the final straw for Rafe and Hope’s crumbling marriage, so it affected her a great deal. Furthermore, Hope has lost a child of her own. She was crushed when Zack Brady died as a young boy, so she’ll be appalled to learn Ted would bring that kind of sorrow to “Nicole Walker” (Arianne Zucker).

The fact that it wasn’t the real Nicole won’t matter since Ted didn’t know that. Days of Our Lives spoilers say Ted and Hope will lock lips during the week of July 15-19. Ciara Brady (Victoria Konefal) will catch them making out and immediately question her mom’s judgment. She won’t have a good feeling about Hope and Ted’s romance, which will turn out to be exactly the right instinct.

Days of Our Lives spoilers reveal that Hope will ultimately get burned in love once again. Ted’s leaving, so he won’t have a chance to make things right. What’s next for Hope’s constantly broken heart? Should Hope stay single for a while and try to heal herself? It might be wise since Rafe can’t seem to make her happy either.

It’s possible Hope and Rafe will get back together eventually, but maybe DOOL should try something else. They could always bring in a fresh face to find love with Hope. Some new blood never hurts, especially since there aren’t many options for Hope in Salem.

However, the best possible outcome would be Bo’s return from the dead. It’s remarkably easy for Days to explain away tragic demises, so we’d have no problem accepting this one. Even if Bo couldn’t come back full-time, he could still pop in enough to make this work. It’s not like we see Justin Kiriakis (Wally Kurth) and Adrienne Kiriakis (Judi Evans) much either, but we know they’re around.

Bo and Hope were one of DOOL’s best supercouples. He was arguably her top love interest, so we’ll never stop rooting for “Bope’s” reunion! Would you like to see Bo make a Salem comeback someday? We’ll give you updates as other Days news emerges. Stick with the NBC soap and don’t forget to check CDL often for the latest Days of Our Lives spoilers, updates and news.