BY hellodrdavis on July 8, 2019 | Comments: one comment
Related : Days of Our Lives, Soap Opera, Spoiler, Television 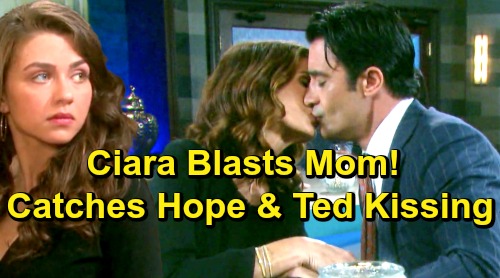 Days of Our Lives (DOOL) spoilers tease that Ciara Brady (Victoria Konefal) will soon get a big shocker. She has spent about a year listening to people tell her that her relationship with Ben Weston (Robert Scott Wilson) is a terrible idea, even though it seems that Ben has really turned a corner and has overcome his past.

The person who has been the most vocal in speaking out against Ciara being with Ben has been Ciara’s mom, Hope Brady (Kristian Alfonso). In the past, Hope has really led the charge against Ben being in Ciara’s life, and Hope has tried on multiple occasions to nail Ben for trying to kill Ciara. She suspected Ben of starting the first cabin fire that nearly killed Ciara, but it was later revealed that Claire Brady (Olivia Rose Keegan) was to blame.

Well, now it seems that Ciara and Hope may find themselves again at an impasse over a man, but this time it looks like it will be Hope’s man that may cause a rift between mother and daughter. As DOOL viewers know, Ted Laurent (Gilles Marini) has been romantically interested in Hope for months. He’s relentlessly pursued Hope, even when she was still married to Rafe Hernandez (Galen Gering).

And even though Hope has told Ted on multiple occasions that she’s not interested in a relationship with him, he’s persisted, and the two even kissed on more than one occasion. Hope has protested, but there seems to be a small part of her that has some interest in Ted.

When Ted went missing thanks to Xander Cook (Paul Telfer) and Kristen DiMera (Stacy Haiduk), Hope started to worry. And now she’s getting close to tracking him down, as he’s being held captive with Kate DiMera (Lauren Koslow). Once Ted is freed, it looks like he’s again going to profess his love for Hope, but will she be receptive now?

Well, it certainly looks like she might be, considering that Days of Our Lives spoilers say that Hope and Ted will share another kiss after he’s released from captivity. It will be an interesting situation, since Ted will still have some big secrets to keep from Hope about exactly why he was held captive in the first place.

But things will also get interesting for another reason. Ciara is going to catch Hope and Ted in their big kiss. And that’s going to come as quite a shock to Ciara! Of course, Ciara loved having her mother married to Rafe, and she considers Rafe to be a very special person. She’s not going to like seeing Hope move on so quickly…and not with Ted.

It will be interesting to see how Hope reacts to Ciara’s disgust when she sees the smooching scene. Suddenly the roles will be reversed, and Ciara won’t like her mom’s choice in men. We’ll see how that plays out, but it certainly looks like Ciara is going to give her mom a hard time and blast her choice in making out with Terrible Ted.

Of course, Hope may want to point out that Rafe certainly didn’t waste any time in hooking up with Carrie Reed (Christie Clark) right after their marriage ended, so it’s not like a kiss with Ted is a big deal. But it will probably feel like a big deal to Ciara, who does not like Ted and would much rather her mom stick with Rafe.

Do you think Ciara’s feelings will sway Hope at all about Ted? Stay tuned to DOOL and don’t forget to check CDL often for the latest Days of Our Lives spoilers, updates, and news.