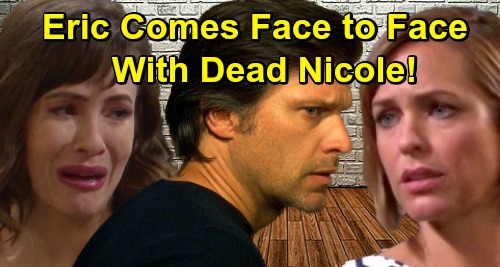 Days of Our Lives (DOOL) spoilers tease that some bombshells are headed Eric Brady’s (Greg Vaughan) way. For starters, Eric will be in total panic mode when Holly Jonas (Harlow and Scarlett Mallory) goes missing. She’ll be kidnapped during the week of April 22-26, so Chloe Lane (Nadia Bjorlin) should give Eric updates when she realizes Holly’s gone.

Naturally, Eric will do everything in his power to track Holly down. He promised to look after the kid before Nicole Walker’s (Arianne Zucker) presumed death, so he’ll want to keep that promise. Days spoilers say Eric will offer plenty of reassurance to Chloe. He’ll vow to do whatever it takes to find this little girl they both love so much.

Of course, Eric will also profess his love to Sarah Horton (Linsey Godfrey) just before the crisis hits. That’ll give him someone to lean on as the chaos revs up. It’ll be a big mess already, but the messiest twist is who’s behind the kidnapping. There’s a good chance it’ll be Nicole herself, so Eric’s in for a real shock when he learns the truth.

Days of Our Lives spoilers say Eric will eventually come face to face with his soul mate again. He’ll undoubtedly look like he’s seen a ghost when that happens. Eric thought Nicole was gone forever, but she’ll be staring him right in the eyes. He’ll wonder how this happened and why Nicole would let him believe she was dead. Nicole even left her daughter in the dark, so she’ll have some explaining to do.

There’s a possibility Nicole needed some time to recover after that DOOL explosion. There’s also a possibility that Nicole simply thought she was doing the right thing by staying away. If that’s the case, Nicole apparently changed her mind and decided kidnapping Holly was the best plan.

Regardless, Days of Our Lives spoilers say Eric’s about to face a flood of emotions. He’ll experience relief, joy, confusion as well as a torn heart and maybe even some anger. Eric has developed genuine feelings for Sarah, but how can Eric stay away from the love of his life – even if Nicole betrayed him? The truth is he probably can’t for long!

Still, Days will inevitably play up the angst angle and milk the drama for all it’s worth! Eric and Nicole have a wild ride ahead of them, so buckle up and get ready for all the action starting April 25. We’ll keep you posted as other news comes in. Stay tuned to DOOL and don’t forget to check CDL often for the latest Days of Our Lives spoilers, updates and news.