Days of Our Lives Spoilers: Sarah and Eric Fall In Love – Just In Time For Nicole’s Return 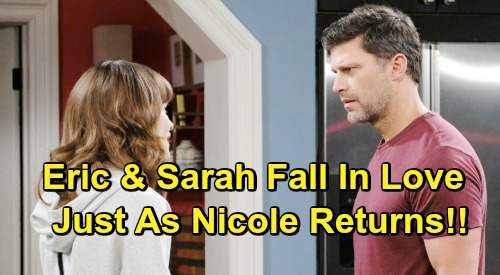 Days of Our Lives (DOOL) spoilers tease that Sarah Horton (Linsey Godfrey) will soon be faced with the truth about Eric Brady’s (Greg Vaughan) feelings. Sarah and Eric deeply care for each other, but they just can’t seem to get on the same page. And now Sarah has become re-engaged to Rex Brady (Kyle Lowder), thinking that Eric doesn’t feel anything for her.

But soon, Sarah will get some new information about Eric’s true feelings. Previously, when Sarah confessed her feelings for Eric, he lied and said that he didn’t feel the same. Eric is a man of faith, and he had made a promise to God that he would walk away from Sarah if his mom Marlena Evans (Deidre Hall) survived her poisoning ordeal. Of course, Marlena survived, and he kept his promise.

But Marlena is aware of Eric’s feelings, and she’s been thinking about spilling the news to Sarah. She knows that Sarah and Rex are engaged again, but she doesn’t think that it’s right for Eric to deny his feelings. According to Days of Our Lives spoilers, Sarah and Marlena will soon have a chat, and Sarah will manage to get the truth out of her.

DOOL spoilers also say that, shortly thereafter, Eric will come clean to Sarah. Finally, the two will be able to have an open and honest conversation. It might spell disaster for Sarah and Rex’s relationship, but at least things will be out in the open, and if Sarah and Eric choose to pursue a relationship, they’ll be able to.

But there’s another wrinkle in this story, and it all has to do with timing. As DOOL viewers know, Nicole Walker (Arianne Zucker) will be returning soon. Her return airdate is currently set for Thursday, April 25, which will be shortly after Eric comes clean about his feelings for Sarah.

The details of Nicole’s DOOL comeback remain to be seen, but the whole thing will be a shock for Eric, and his world will be rocked. Sarah and Eric may have feelings for each other, but Nicole is Eric’s true love, and once she’s back in the picture, it’s pretty clear that Sarah won’t stand a chance.

Of course, once Nicole’s back on the scene, Sarah may want to go back to Rex, but it could be impossible at that point. Sarah may end up the real loser in the end, as she loses both Eric and Rex. What a mess.

Are you looking forward to seeing Eric reunite with Nicole? Stay tuned to DOOL and don’t forget to check CDL often for the latest Days of Our Lives spoilers, updates, and news.